Statscan has a great table showing the rural VS urban split here in Ontario.

There's a problem with it though, it does not reflect "feeling".


That might sound stupid, or silly, but I think it's something we overlook when it comes to politics.

Statscan defines "urban" as anyone living in a population centre with over 1,000 people, and, anyone living outside these areas but in an area with over 400 persons per square kilometer.

This means the nearby settlement to me, of Wyevale, seen here on google maps, is an "urban area"

It's difficult to try to figure out exactly how many people live in areas above or below a certain point. Consider that even Toronto has farms within it's municipal limits.


I have tried to estimate levels of "feeling" in the various ridings in Ontario. I caution these are personal guesstimates, and there are no hard facts and figures. Red means fully Urban while a darker Green indicates fully Rural. Lighter shades indicate a slightly mixed feeling with one side favoured, while Orange/Yellow indicates a roughly equal mix of the two. 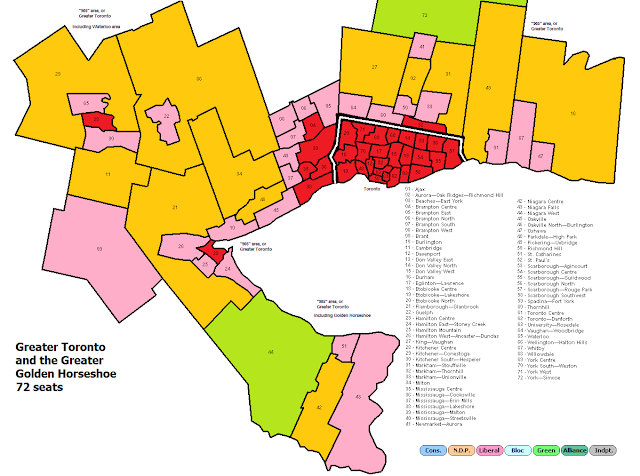 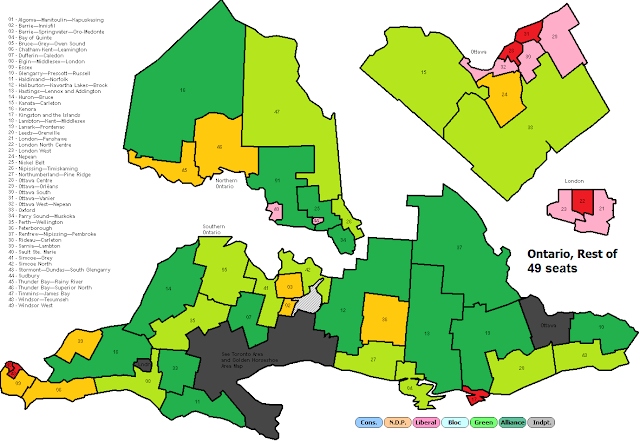 Again, no hard numbers, but from this, I would estimate that a good 40%-45% of Ontarians consider themselves to be "Rural", regardless of what the official statistics say.

This is one reason why "rural" arguments impact. You are not talking to the farmers who live between Goderich and Kincardine, you are talking to people who live in Stratford. Your arguments aren't only for those in Port Milford, they are for those in Cornwall.

In general, and it's not an exact science, and there are always nuances, but you can assume that a third of more of those people listed in the "urban" section would self-describe as "rural".

Using this formula, Ontario is 42.7% rural. Quebec is 46% rural, Alberta is 45%, BC is 42.6%,  and the closest to the borderline is Manitoba at 51% rural, with all other provinces showing up as more "Rural" than Urban using this formula, with PEI being the most "Rural" at 69%, which, having lived there, seems low.