Not much to update right now, however, I will share with you this:

It is a preview of things in Italy, where the 3 leading parties (in the polls) have managed to effectively tie one another. Additionally, this would lead to a tie between left and right wing parties.
Posted by TheNewTeddy at 9:41 AM No comments:

New Israeli Government is sworn in.

The government mentioned in my previous post has been sworn in.

One Ra'am MK abstained, meaning the vote was passed 60-59. Some key cabinet posts, held by the party leaders, are as follows:

Including the PM and all deputy ministers, cabinet is as follows:

Posted by TheNewTeddy at 3:17 PM No comments: 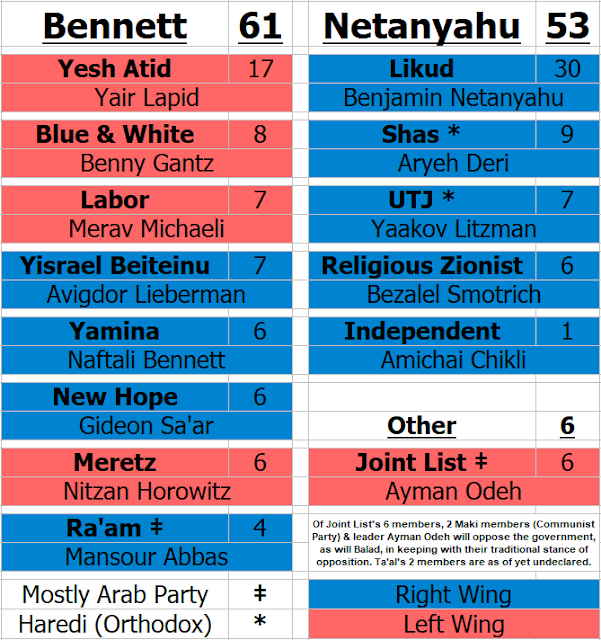 Posted by TheNewTeddy at 11:17 AM No comments:

In Mexico, the governing Moreno party has taken roughly 200 seats in the chamber, down 50. The right-wing PAN has taken around 110, a gain of 30, while PRI will take about 70, a gain of 20. Counting is still early, and so the numbers are general. Helping President Lopez-Obrador is that their new ally, the Green Party, is set to take around 45 seats, up from 10. Labour will retain its 40 or so seats, they are another ally of the President.

In Saxony-Anhalt, the CDU has outperformed expectations. Current count suggests results are as follows:

This would enable a simple CDU-SPD majority, but, it would be the narrowest of majorities, of only one seat. It would, however, enable the CDU to swap the Greens for the FDP if they did decide on the need for a third partner. Counting continues, and these numbers can change. In particular, the current count includes 14 overhang seats; meaning the total numbers could change radically as the number of overhang seats changes; while the overall balance would remain the same. This large number of overhang seats comes from the CDU currently winning 40 of the 41 constituencies in the state in counting.

Posted by TheNewTeddy at 7:02 AM No comments:

Elections tomorrow in Mexico and Saxony-Anhalt

A short post. Tomorrow Mexico holds elections for its parliament, and the results are expected to roughly mirror the last election. Polls are as follows:

Saxony Anhalt will be the more interesting location. Polls suggest the following:

with the Free Voters list at 3%, below the threshold.

The current government is an unusual CDU-SPD-GRN coalition. It is very likely that following the election, the coalition will change, but, will likely retain the CDU at its head. The main concern is if the AfD can overtake for first place. Even if they do, their participation in any coalition is rather unlikely.

Posted by TheNewTeddy at 10:16 AM No comments:

Israel's first Prime Minister, David Ben-Gurion, was from the Mapai party. That party went on to become Labor, including a period as part of the "Alignment" alliance. In 1977, Menachem Begin, leader of Likud, became the first Prime Minister to not be from Labor.

In 2001, Ariel Sharon, Likud leader and Prime Minister, founded Kadima, while in office. After his strike, Ehud Olmert took over as Kadima leader. He too, was from Likud.

Yair Lapid has informed the President that Naftali Bennet is to become Prime Minister.

Bennett has never served as an MK (member of parliament) for any party except the one's he has lead. While a member of Likud from 2005 to 2008, he never was elected to office under that party's banner.

There is still a chance it can all go wrong. The new government has a week or so (12 days it seems) to pass a vote of confidence. Should they fail, new elections will be held.

Once they take office, the new Knesset will look like this:

This government will be difficult to manage, presuming it does indeed manage to pass.

There are still details to work out between all the parties.

Posted by TheNewTeddy at 5:22 PM No comments: