I will still talk politics from my main/personal twitter account, but this one is specifically for the blog. In particular, this is so I can follow hyper-partisans without reading their partisan propaganda when I just want to check twitter to see what my friends are up to.

In Ireland, things are slowly continuing. It seems we are on the path towards a FG-FF Coalition. There are a few problems. First is Irish Water. This is a government agency that is very unpopular, but that is likely the best way to manage waste water. It's not uncommon that a pragmatic idea will be very unpopular, look at the GST in Canada for a good analogy. Because of the pragmatism, it is likely Irish Water will stay; as a result FF will need to get something, and likely will announce "significant and real" reforms to Irish Water; which will be neither significant nor real.

There are 17 Cabinet positions in Ireland, one of which is the PM or Taoiseach, and another is Tanaiste, or Deputy PM. If balanced according to seats won, there would be a total of 9 cabinet members from FG and 8 from FF.

There are three basic ways a coalition could work. The first is the traditional method; with the FG leader becoming PM, FF leader becoming DPM, and the cabinet being split. The problem with this is the Kenny 'lost' the election and FF is almost certain to want another FG leader; FG may not want to dump Kenny and find a replacement so fast. Despite that, this is still a possibility.

The second option is the pragmatic and unemotional option. This would see the FF leader become PM, in return for a greater balance of power going towards FG. This might be done simply by adding one or even two additional FG cabinet ministers. This is smart because there are still a few tough years and decisions ahead, and having Martin (FF leader) wear these problems in the public eye would be helpful. The problem with this is that it goes against human nature and emotion; FG 'won' the election and would be likely to play second fiddle.

The final option is a rotating system. If FG is smart they'll have FF go first; but in short, this would see the leader of each party be PM for two years. One good way to pull this off is to force an election at the end of the term of the first in the rotation in the hopes that they will wear the problems of the day and that your party can gain additional seats.

I will keep you updated on how this evolves.

In the USA I've done a bit more research (here are some maps) and my current prediction is as follows: http://www.270towin.com/maps/aDP9g
Posted by Unknown at 5:44 AM No comments:

US update - what can happen

I had a request from someone to make another post about US politics.


DEMOCRATIC PRIMARIES
It seems pretty clear that Clinton will win. Sanders is doing as well as Obama did in 2008, and, Obama won... but Sanders is unable to tap into the african-american vote, and as a result, will not win. He may take 40% or more of the delegates, and I expect him to "officially" stay in the race to the end, but I do not see a path to victory for him at this point in time.

If Clinton is smart, she will have Sanders as her VP. Unlike Obama vs Clinton (where Clinton lost) there was no huge motivating factor to appoint the loser as the VP. Obama needed a moderate, but could have chosen any moderate. Clinton (this time) does not need a moderate or a progressive, she needs someone who managed to tap into what Bernie has tapped into. It is possible she will pick someone else, and ask Bernie to play an important role in the Senate, or perhaps the Cabinet; but if she is smart politically, she will have him as her #2, and it is in that situation (and only that situation) that I could see Bernie calling it quits before the convention.


REPUBLICAN PRIMARIES
What is interesting is that Romney has decided to stick his nose into the primaries. He's not running (officially) but he is - to boil it down to it's simplest - pushing for a open/contested convention. This would mean that the actual delegates elected will pick the next candidate though multiple rounds of voting. Canadians will be familiar with this as prior to the 2000 Alliance convention, this is how all leaders were chosen (with some caveats for the NDP and Labour support)

There are a few questions about the primaries, but the primary question is if Trump can manage 50%+1 of the delegates prior to the actual convention date. The answer seems to be no, but that can change. The second question is if Cruz can become the "Not-Trump" and it does seem like this is possible; but this will be balanced by people who dislike Trump who will vote for him on the grounds that they do not care for Cruz.

Trump remains the candidate of authoritarian change. He represents (in the minds of people) the basic idea of a corporatocracy; that what's best for business is best for everyone, and that the government should serve the best interest of businesses because through that, they best serve the people. Cruz remains the representative of the ideals of the Tea Party; especially the socially conservative wing. Cruz may be a bit of a jerk, but many politicians are jerks and they still win. Kasich represents the "Moderate Republican" who is pragmatic on economics, pragmatic on most issues that could be considered social, but very small-c conservative on the few 'litmus test' issues like abortion. Rubio's problem is that he is "not" any of these. If you don't like Trump's racism, Cruz's defective personality, and Kasich's abortion fanaticism, you vote for Rubio. This is part of his problem, generally if you don't like one of these, you are already with the other two.

In the end my money is on a contested convention, and Trump being the nominee after all the various shifts. The only question is if his choice of VP candidate also gets nominated (my money is on no) and if not, how that VP will act if Trump wins (my money is on becoming almost like an opposition leader)


GENERAL ELECTION
I still can not see how Trump can win. That being said, there is a way - I just do not see the stars lining up.

Anger is what is fueling both Sanders and Trump. Trump needs for things to get worse, in some way. Domestically is a sure bet; have the economy fall into another recession. A foreign collapse (such as all of Syria falling to ISIS) could work, but Trump does much better on economic anger; those "mad at muslims" are already "mad at muslims" and will remain "mad at muslims" no matter what happens in Syria.

I expect an election to be similar to 2012, where one candidate leads in all the poll averages from start to finish. Clinton has been winning every poll (average) against Trump since this election began, and she will beat him on election day.

I will, of course, cover the general in more detail as it gets closer.
Posted by Unknown at 3:12 PM No comments:

One thing that I pride myself on is my use of little words. Sure I can use big words, but I do not. Why? Simple. I want to keep my message accessible. It is not just about reaching those who were born here in Canada, but also those for whom english is a second language.

Anyway, this was inspired by a youtube video I am watching.

This video does contain offensive language and images.

However it does explain my point pretty well.

I feel this is one of the biggest things that separates my blog from some others like the world elections blog. I'm not here to explain everything to you; I'll give you the basic background so you can digest a post in 2 or 3 minutes, and go on about your day. If you want to dig in, you can, but my primary objective is accessibility. I want to be sure that everyone can read this blog if they choose to do so, even if that comes at the cost of having each and every single one of those people choosing another politics blog as their person favourite.
Posted by Unknown at 4:57 PM No comments:

The final results are in

Both Healy-Rae brothers are truly "independent" in all aspects of the word, and lean towards populist politics.

Collins wishes to ally himself with the Healy-Rae brothers.

Pringle, Zappone, and O'Sullivan are all quite left.

Lowry is a bit of a pariah.

Naughten is centre-right, and pro-rural.

McGrath, Connolly, Grealish, and Harty are all a bit difficult to pin down, and seem to have specific concerns.

As such I would break things down as follows:


For an end result of:

Among this group, AAA-PBP, and SF will not be in any coalition lead by FG or FF.
Labour claims to feel the same way, but I have my doubts. The Social Democrats also say they'd need a pretty convincing deal, but I also think they can be swayed.

The N-G members would never go, as, likely, would the Left IND or WAUG members. This means that there are only 17 Independents that would sit in a coalition, 27 if you count Labour and the SocDems. That's not enough for a majority even with FG.


As such, a FG-FF coalition is the only one that could obtain a majority. All other options mean a minority government, and, a likely election in 6 to 18 months.


I also made an interesting map, showing the final eliminated (losing) candidate in each district. Adding this to the real results would result in the following: 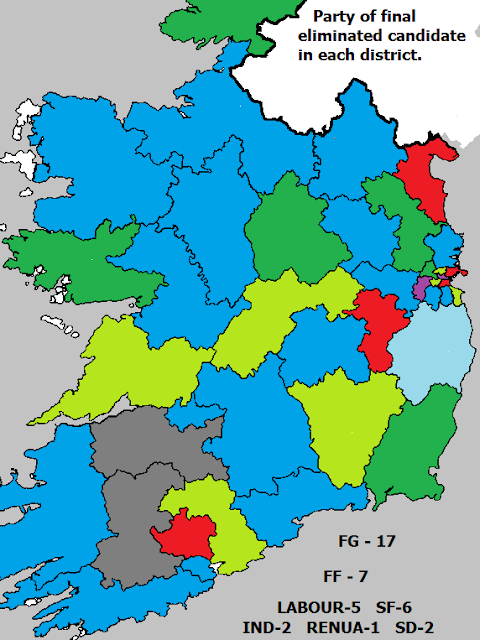 A majority would be roughly 100 in this fantasy parliament;
Posted by Unknown at 8:23 AM No comments: