The count has progressed, and has lead to a refinement in the Teddy Count.

Labour should manage to get it's 7 needed for "Speaking Rights", AKA Party Status.

The others seem to break down as below:

It is possible that with the AAA-PBP and the IA sitting on the line of speaking rights, that the two groups may find a willing Independent to join them and thus gain speaking rights in the Dail.

Posted by Unknown at 2:57 PM No comments:

95 of the 158 seats are declared, but I've been able to count up some of the remainder, using what I expect to happen as the counts continue as a base. As such, these numbers are not final.

The Independent Alliance, from what I can gather, seem to be for "good government" and seem, perhaps, to be an alliance of Independents who very much want to be in government. As such, I expect them to possibly fill the gap in any coalition that does not make a majority.

SF has said, as expected, that would not sit in a government where FF or FG is the Sr Partner. Due to their poor showing (vs expectations) I can not see them in any position except opposition.

You need about 80 seats for a majority. Sure you can do it with 79 if you get the math right, but I'm going to use 80 as my number.

FG's options:
No FF
They need 29 more seats. They'd never sit with SF though.
With Labour they reach 58, and with the AI they can reach 63. Even if they invited in the SD's, and Greens, they still brings them to only 68. They'd need the support of 13 of the Independents to get a majority and I just can not see that happening. They might try to run a minority government with 68 seats, or more likely 63.

With FF
Together these parties have a clear majority of 95, far above the 80 line. The problem is these are two parties that, a century ago, fought a civil war with one another. It's more nuanced and complex than that, of course, but there will be a lot of effort needed to get these two parties to work together, even if their actual policies are not that far apart.

Other options:
There are none. FF could only cobble a coalition that contains SF and they are unwilling to accept such a thing without being put in the drivers seat. Perhaps if the seat balance was 34 VS 33, but with 43 VS 24 that is not going to happen.

As such there are only two options I see going forward

Majority FG-FF Grand Coalition. Like the last government, I expect such an attempt to result in both parties bleeding TD's through the entire term.


Personally, my money is on the later.
Posted by Unknown at 4:19 AM No comments:

Counting will be underway today, but we have exit polls, and as such, a little bit of a better idea what might happen. Current prediction is as follows:


Note that 3 TD's who are not officially part of the AAA-PBP are being counted as part of it due to their ideology.
Posted by Unknown at 3:46 AM No comments:

Still on break, however, Ireland is having an election today, and I decided I'd share my prediction. Results should become clear by Sunday night.

A few predictions about where to go from here

FG will consider a minority, perhaps with Labour in tow. They'll look at a grand coalition with FF but my money says they'll opt out and try for a minority, at least, at first.

FF will likely not know what to do. A coalition with SF is unpalatable, as is a grand coalition, but they'd likely lean towards the latter if both were on the table, but, chances are, they'd prefer to be left out of government rather than going with either of the two other options.

SF is the sort of party that'd try to form a coalition with AAAPBP (for a new total of 35 seats) as well as Labour (for a new total of 44) and then approach FF, saying they are the Sr partner (with 44 seats), and thus, they should be the head of government.
The more sensible option for them is to try to form a government with FF as the Jr partner, and bring in Labour, AAAPBP, SD, the Greens, and the progressive Independents. This is what I expect them to do.

The remaining parties can only react.

Just a quick note that we've not gone away, we are just, for lack of a better term "on break"
Posted by Unknown at 1:42 AM No comments:

I've decided to make a list on what I've decided as the final "labels" that I'll attach before a post.

Housekeeping: These are things referencing the blog itself and how it operates. Housekeeping posts may include announcements as to if I'm taking a break, if I'm going to a schedule of some sort, or anything else relating to the operation of the blog itself.

Country: The name of any country (save Canada, her Provinces, Territories, and Municipalities) that the post is about. This should help people find things they are interested in. I may also use sub-national units like "Scotland" or "California" of the post applies to that area alone, but will not always do so, as, many people may not know where "Schleswig-Holstein" or "Limpopo" even are.

Thought: In general, a ramble about an issue full of opinion. I try to keep my posts free of opinion and full of act; my mission is to provide you the facts and let you decide upon an opinion based on that; but from time to time there is something I feel strongly about, and will have a thought I wish to share.

Issue: Similar to a thought, except, focusing more on facts and less on opinion; the idea here is that I'm presenting an issue that's been in the news (or may become in the new in the coming future) for your consumption.

Video: Reserved for when I start doing videos.

Audio: Same as above, but for audio.

Prediction: For Canada (and her subregions) only; this is a non-official prediction for how I think an election will play out.

Projection: For Canada (and her subregions) only; this is an official, mathematical, thought out, and calculated projection for how I have some level of confidence that an election will play out.

Alternate History: There is some interest in this, and I share it, so from time to time, you may see this.

Off Topic: Anything unrelated to politics.
Posted by Unknown at 3:23 AM No comments: 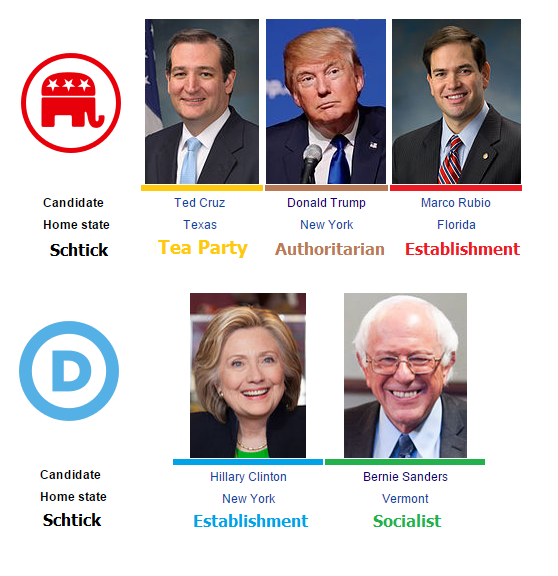 Not much commentary; simply the field has been whittled down to only 5 realistic candidates.

It's possible that the Republicans could come out of New Hampshire with a 4th, but that is unlikely.
Posted by Unknown at 6:34 AM No comments:

Two by-elections were held in BC today. The riding previously held by the NDP was retained, while the riding held by the BC Liberals was won by the NDP. Interestingly, in the NDP-heavy riding, the Liberals fell to third, behind the Greens. I've done some math, a projection, showing how this would impact the next election using the factors determined from the by-election results.

Factors (used in this example)

BCL to GRN
nothing

As you can see, this would result in an NDP majority. There is always caution in calling elections this early, so take it with a grain of salt; but with the Greens quintupling their seat count, the government in BC is in danger from attacks on both sides.
Posted by Unknown at 1:16 AM No comments: