In the German state of Saarland, the SPD has won the election. Currently, with votes still being counted, they are at 26 of the 51 seats, a majority. It is possible they will retain that majority as counting continues, but it is also possible they'll fall below a majority. In the latter case, there are easy coalition options with the Greens or the FDP.

Trends elsewhere continue as they have been, but, are starting to get closer to solid. In Italy, the FdI has lead in a number of polls. In Hungary, Orban's Fidesz party has started to slightly pull away from the opposition coalition. In Israel, Pro-Netanyahu parties are getting ever closer to polling a majority. In France, Le Pen has taken a clear 2nd place on the first ballot, while remaining at a loss to Macron on the second ballot.

I'm also looking at other places. In the Philippines, the Marcos-Duterte ticket appears to be polling over 50%, quite a feat when the next two closest tickets are polling at 20% and 10% respectively. They ticket's platform would see the existing policies under Duterte Sr continue. Elections take place May 9th

Lebanon, hopefully, votes May 15th. They've had elections be canceled in the past. There is no reliable polling, so it is unclear who stands to gain or lose, but the 2020 explosions will almost certainly have a major impact on the result.

Unless they want to hold separate House and Senate elections, Australia goes to the polls by May 21st. Labor has a massive lead in the 2PP vote according to polling. With a margin of up to 58%-42%, this could be an effective landslide. If this holds, it would be the largest margin of victory since the 70's, or possibly 60's. If the 58%-42% figure held, it would be the widest margin of victory since 1943. However, there is good reason to believe that things will tighten as the election draws closer, as, this has happened in every recent federal election in Australia. Still, I would not be surprised to see Labor alone win over 100 seats. The Pendulum suggest the Coalition could be reduced to 40 seats total.

Lastly, Nepal will vote some time this year. Nepalese politics is complex. It has 3 communist parties, and it is unclear what exactly the difference between them is beyond the people who lead them and may dislike the other leaders on a personal level.

Posted by TheNewTeddy at 1:18 PM No comments:

A quick update on world politics.

Where things have 'changed', such as Brian Jean's by-election victory, the meaningful result of this, has yet to play out.

The only major news update is the election in South Australia, which, due to the Ukraine crisis, I've not followed as close as I otherwise would have. Labor appears to have win a majority in the state.

Beyond that, I wish to note upcoming elections.

3rd of April, Hungary votes. I will be covering that.

3rd of April, Serbia also votes. I will cover the results.

10th of April, Mexico holds a recall referendum on their president.

5th of May are local elections in parts of the UK.

Posted by TheNewTeddy at 2:07 PM No comments:

Elections are taking place in South Korea today. The right-wing candidate appears to have defeated the left-wing candidate for the Presidency, but counting continues, and the vote lead is small.

I keep an eye on politics, as usual, around the world - I've yet to see any major changes in polling (outside Ukraine itself, and Russia) with the only notable trend being a 1% or 2% boost to incumbents in many western countries.

That's all for now.

Posted by TheNewTeddy at 11:18 AM No comments: 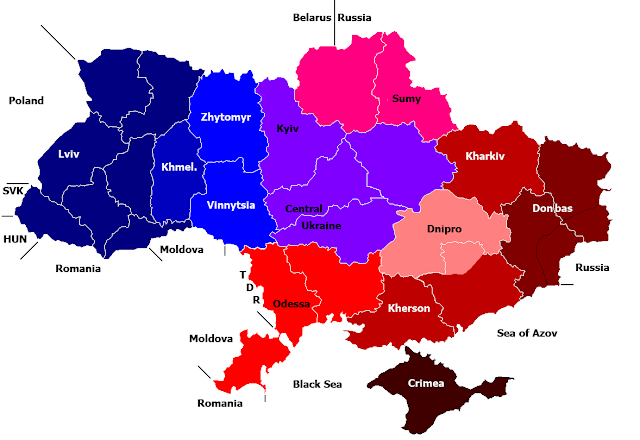 This seems to be what may be going on. Let me explain;

You may have seen Russian propaganda map suggesting Ukraine is not a real country, and is only a tiny part of modern Ukraine. These maps always have the pink region "Dnipro" as part of 'real' Ukraine. It is interesting that Russian military operations seem to not be interested in this area, despite it being economically strong. Russia may, thus, have 0 desire to annex this region.

If that's true, then they also are unwilling to annex "Central Ukraine", shown in blueish purple. This contrasts with areas around Sumy, shown in reddish purple, where Russian troops already are operating.

Kharkiv and Kherson also have Russian operations, while it looks like they want to take Odessa and area as well.

Less likely to be taken are western areas. Zhytomyr and Vinnytsia are possible targets. Khmel Oblast was part of the USSR in the 1930s and 1920s, but, is currently more strongly tied to the most western Oblasts, which, were part of Poland (and Czechoslovakia and Romania) in the 20s and 30s.

Of course this assumes a partition is the goal. That is becoming less and less likely as the Russian military invasion has slowed down. I will, however, continue to observe the situation.

Posted by TheNewTeddy at 10:02 AM No comments: