It's been brought to my attention that many of you may have questions about Ukraine. I've quickly slapped a map together to help do a quick rundown 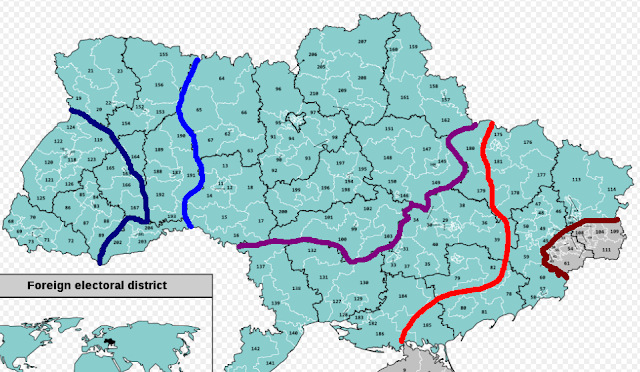 You'll notice I've cut off Crimea. With good reason. Russia will effectively never this up. It is simply too important for them. Crimea is lost. Unless we go marching in, with guns, and by we I mean the west; Crimea stays Russian.

The rest of Ukraine, however, is less certain. Currently, pro-Russian rebels hold the area to the east of the dark red line.

The dark blue line represents the most pro-west part of Ukraine. Russia would be happy of this part of the country just up and decided to leave, as, it would result in a Ukraine that shifts towards Russia due to the loss of this Pro-West area.

The light red line shows the area that would strategically assist Russia in their current goals. This would cut off the sea as Azov, provide additional access to Crimea, and hand over important centres like Kharkiv to the Russians, or, pro-Russian rebels. This city is famous under its russian name, Kharkov, as the site of various WW2 battles.

The light blue line somewhat follows the parts of Ukraine gained after WW2. It also is more pro-west than the rest of the nation.

The purple line is the traditional divide in Ukraine between pro-west and pro-russian political forces.

Russia wants Ukraine to be pro-Russia. That's the core of everything they do. The problem is that the capture of Crimea, and especially the civil war in the east (the Donbass area) have soured Ukrainians towards Russia. As such, it is likely they are more willing than usual to settle for some kind of partition; where their rebels (called New Russia) would take everything east of the purple line. Russia would still, of course, want all of Ukraine, but, this might be the line they have in mind with their current stunts.

They'd love, of course, to somehow push the west back to one of the blue lines, and have the rest of Ukraine be a happy, obedient, puppet state. This, however, does not seem likely.

How the current situation will resolve itself is unclear. My best guess is the rebels will rise again due to Russian support; and smash into the rest of Ukraine. When the Rebels and Ukraine sign their ceasefire, probably after only a few weeks of fighting, the border will just so happen to fall roughly along that line, with the US only implementing temporary and limited sanctions. Russia will then continue to try to "convince" Ukraine to come on over, but the 'current' crisis, which started in 2014, will be over, and things will go "cold" in the area.

There are other possibilities. Any such renewed war might actually see Ukraine wipe out the rebels. This would be a massive embarrassment for Putin. the Rebels also could push all the way to the purple line. A Coup could be organized without the need to reignite the civil war. That coup could fail, or, succeed. Russia could openly march into rebel held areas saying the rebels asked it. If that happens, it could lead to a straight up war between Ukraine and Russia. If that happens, either side could win or lose, but, its very much likely the Russians would steamroll the Ukrainians. In such a war, Europe could get involved, possibly with declarations of war. This could literally see Russia at war with Poland, Italy, France, Germany, and even other NATO countries, such as the UK. The worst case scenario would be the US also declares war, but, I really can not see this as a likely possibility.

The only thing I would rule out, right now, is any involvement of nuclear weapons. If that changes, I'll let you know.

Posted by TheNewTeddy at 7:35 PM No comments:

Only one real update; the Serbian referendum, which passed.

Serbia recently changed its laws to allow for the passage of referenda without a 50% turnout.

These are the facts; however, what is more interesting to me, is the 50% turnout threshold that many countries have.

This is where we veer off the usual fact based talk and get into more opinion based talk; but, why do such things even exist?

The answer is simple enough; to ensure that they people really want change. However; would people simply not be able to vote "no" if they did not want change?

Why are we assuming those who did not turn out are just as opposed as those who vote no?

In my opinion, such rules are silly. If you want turnout, you should simply combine two laws; first, mandatory voting, and secondly, a none-of-the-above option. This allows people to send whatever message they wish.

Regardless, the referendum in Serbia has passed, and as such, Serbian laws will move more in line with laws in the EU surrounding judicial issues.

Posted by TheNewTeddy at 10:17 AM No comments:

Not much to update. A state in Venezuela held elections won by the opposition. I am not a fan of the ruling party in the country, but actually counting the votes (and thus allowing the 'other guys' to win) is something I do support. Not much else to say about this at this time.

I've added new bookmarks to check regularly. I already regularly check on polls in Israel, Italy, Hungary, and France (2nd round, president). I've now added both Ireland and Northern Ireland. Sinn Fein is in an excellent position to win both.

Meanwhile in Northern Ireland, SF leads with 24%. This is down from 28% in the last assembly election. The DUP, which also took 28%, but slightly more votes, is polling far down at near 18%. The why is easy to see, the TUV is up to a whopping 11%. The party is a far more extreme version of the DUP, and on these numbers, could elect a dozen or more members. The non-sectarian Alliance Party of Northern Ireland is also up, at about 15%. Meanwhile the SDLP and UUP, and most of the smaller parties, sit roughly where they were last election.

Elections in Ireland, in general, both in the north and south, are hard to project. If I had to make an utter mathless guess, I'd say SF could take 24 seats, and have a gap on the next party; which I suspect to still be the DUP, at 15. The TUV and APNI could each take 12, and the SDLP and UUP could also each take 12. The remaining 3 seats would be taken by smaller parties. If this came to pass, the Unionists would hold 39 seats, down from 41, while the Nationalists would hold 36, down from 39. 15 non-sectarian MLAs would set a record; and with the TUV in such a strong position (the party opposes the current way the assembly is structured, with its sectarian based co first ministry) we may be approaching a nexus point for NI; where they will need to make a decision on their long term future.

I, for one, could see 6 party talks (SF, SDLP, APNI, DUP, UUP, TUV) take place. If they come to an agreement, which is doubtful, it could become the new way politics are done in NI. If not, it may come down to a referendum on the status of NI, one in which joining Ireland is actually a possible result. In such a result, I've put together a very rough guesstimation of a possible first election in a re-unified Ireland, based on current polls (which itself is problematic). This would see SF take 36%, boosted by a successful reunification, with FF and FG both tie at 13%. The 5 small parties would each take about 5% of the vote, with the 6th, PBP, suffering from the high SF vote, and not clearing 1%. The 5 smaller parties would be the Greens, Labour, the Alliance (which would be a vehicle for NI voters who are 'iffy' about reunification), and the two "Loyalist" parties, the Ulster Loyalists, a successor to the UUP, and the Traditional Democratic Loyalists, a successor to the TUV and much of the DUP. I could see the Ulster Loyalists sitting in the Dail, but the TDL likely would not, at least, not for the first session, and/or at least not quietly.

All of this, of course, is just guesswork and playing around with potential future history.

Posted by TheNewTeddy at 2:12 PM No comments: