Just a quick update on the latest quebec projection 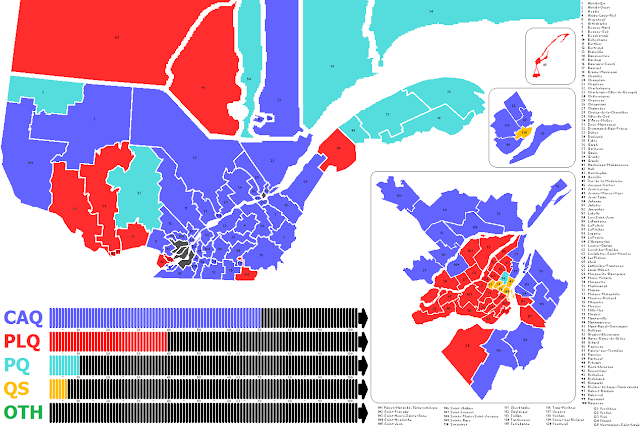 this is all based on polls (no "gut" added in)
Posted by TheNewTeddy at 9:27 AM No comments:

1 - I'm working on getting more Bernier data, but so far, what's been released is very limited.

2 - I'm working on more NB stuff, but again, data is quite limited.

3 - As a video gamer, and, suspecting my small audience is somewhat similar to me, its likely most of you have heard of or will soon heard of the Jacksonville shooting. I want to point you towards this post on my personal blog. The US has a violence problem, taking away their guns will just encourage them to use knives. US culture needs to be fixed and cleansed of its violent ways, doing this will decrease gun violence.
Posted by TheNewTeddy at 2:58 PM 2 comments: 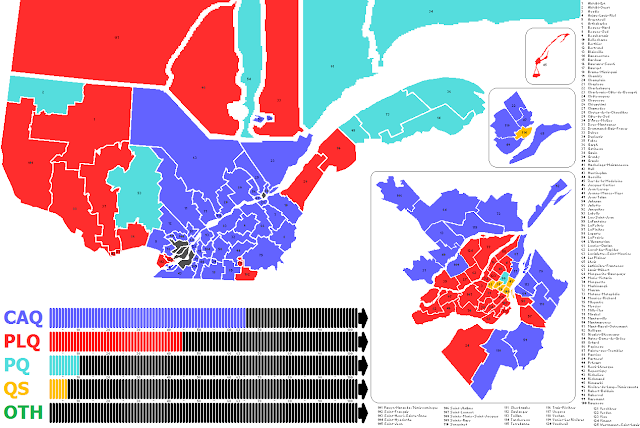 
Posted by TheNewTeddy at 7:09 AM No comments:

Quebec and the possible

First, I want to introduce my now complete Quebec map, already updated with the latest projection 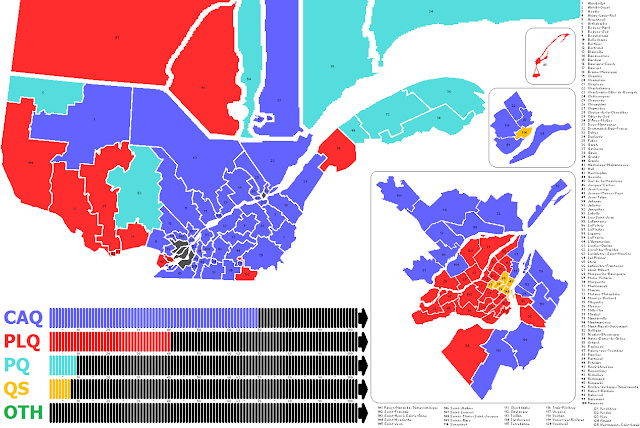 Note the word "Projection" as I now use hard simple math to make these.

As usual, any quebec projection comes with caution.

I've taken a recent mainstreet poll, which detailed 2nd choices, and have applied some math to this.

Assuming that each party takes its maximum - that is it takes (away from the other parties) 2nd choice voters, and, assuming it takes its minimum - that is, it only takes voters without a 2nd choice, the range parties can take is as follows:


Lets examine each party in turn with their maximum 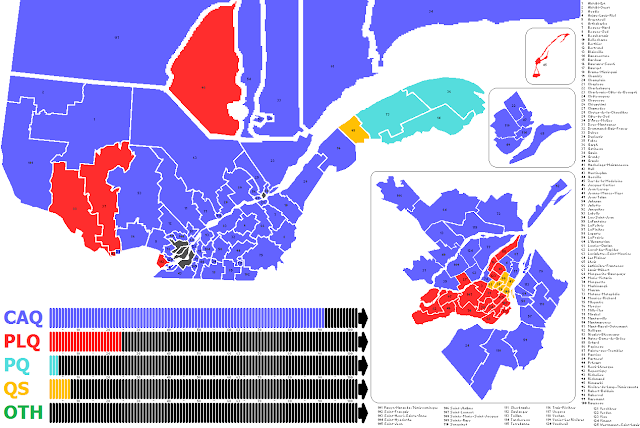 The CAQ would easily win a large majority.


Next is the PLQ 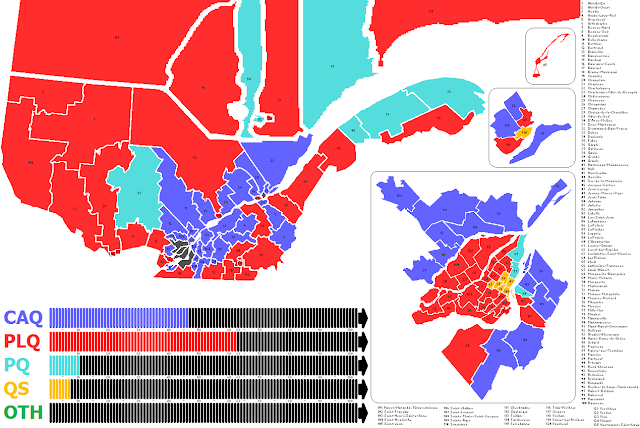 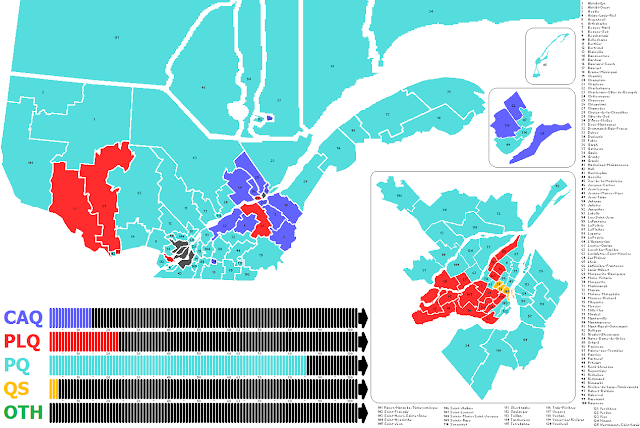 Part of the reason the PQ would do so very well, is a huge fraction of the potential PQ voters are voting for the CAQ and QS, and hence, the PQ remains their "second" choice. The reality is that the PQ is on the way down, not up. 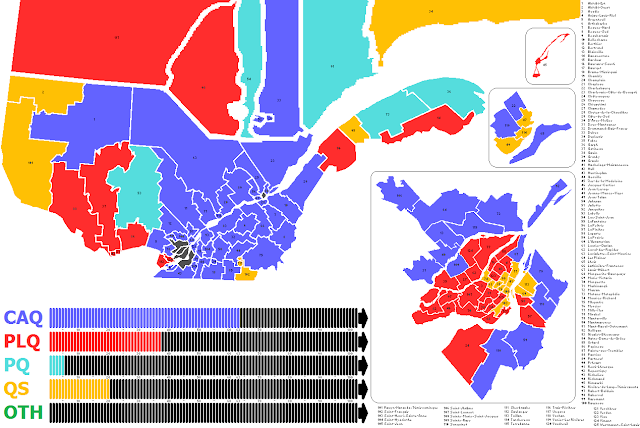 The CAQ would still win a majority, and the PLQ would be the official opposition; but the QS would clearly displace the PQ as the party of sovereigntism. 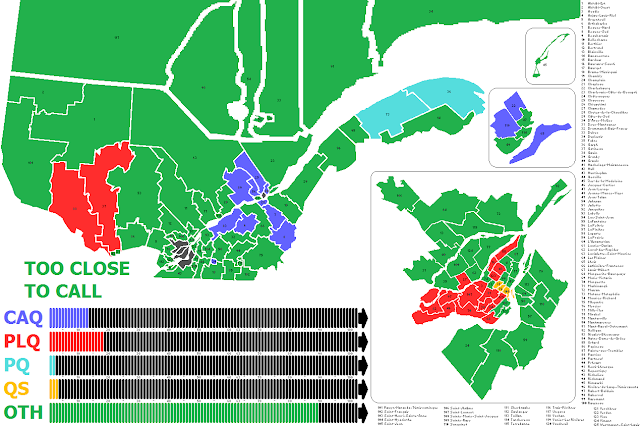 are a majority of all seats.
Posted by TheNewTeddy at 11:03 AM No comments:

Again, this is a "prediction" and has not gone through the same math as projections do. 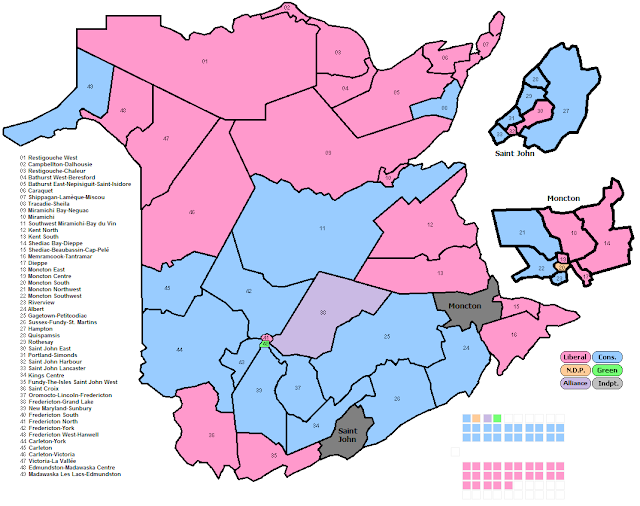 High weight is given to ridings without incumbents switching parties.

I also recommend keeping an eye on Oromocto where the son of Ab Rector, former leader of the CoR, is running for PANB.

Both CoR and PANB are similar in many ways to the old Reform Party and Canadian Alliance.

The Liberals have the edge here, the sole NDP seat is very weak and could easily be retained by the Liberals, and even without it they win an extremely narrow majority; with 4 opposition parties it will not be hard for the Liberals to find someone to agree with them on nearly every bill.

edited to add - please note I coloured in the incorrect riding, Moncton south is not going NDP. Saint John Harbour however may.
Posted by TheNewTeddy at 10:47 AM 2 comments:

Good morning, the summer season is coming to an end meaning politics season is ramping up.

There are many elections to look forward to over the next few weeks.

Sweden goes to the polls early in September, it looks like the Left alliance will win placing the Social Democrats back in government, but the Neo-Nationalist Swedish Democrats are doing very well in polls, and while they can not win due to a lack of coalition partners, they could still place well.

New Brunswick votes later in September, and trends show the PC Party could pose a serious challenge to the sitting Liberals. It will be interesting to see if the Greens hold on to their only seat, or of the Reform-Alliance like Peoples Alliance can manage to pick up a seat.

Quebec votes in October, I've included a prediction map below: 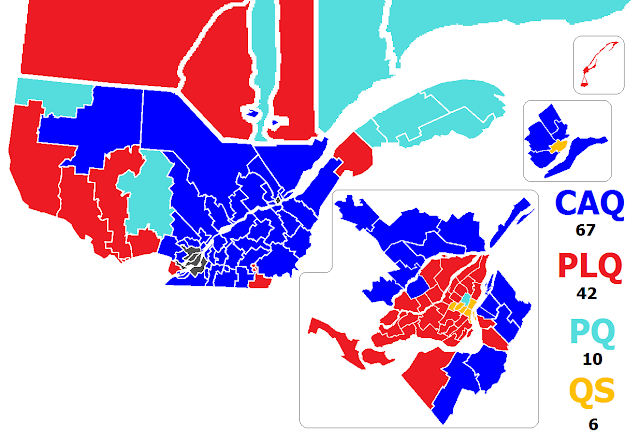 Note this is a "prediction" which means it's not held to the same high standard I hold my projections to, and should be viewed in that context. The map, as well, is a work in progress.

I've had some questions as to why I've "reversed" the colours, using "Federal" colours instead of the more traditional PQ as darker blue and CAQ as lighter blue. The answer is, in part, found in the question.

It's easier to understand if a single template and palette of colours is used, and as such, it is desirable to use this in every province, every time. So when/where/why is that not done?

There are some parties that do not like the 'traditional' colours. The Saskatchewan Party operates as the main right-wing party in Saskatchewan, but due to history (there still is a Saskatchewan PC Party in existence) it does not use blue, and instead, uses Green. Given that it is a major party (the current government) it, as such, has widespread support (meaning people who like the party are more likely to be readers, VS, supporters of the Sask PCs) and as such, I usually will use some sort of Green for the party on maps, but have been known to make them Blue when I can get away with it.

The BC Liberals have a tradition of being right-wing as well, and could claim blue, and even use it sometimes in their own media. The Yukon Party refused to use Blue for a time.

Using a colour the party does not use becomes much easier when that party is smaller. I can, for example, use the "NDP Colour" for QS due to the weakness of the Quebec NDP.

It is therefore directly a result of the PQ doing so poorly that has caused me to use this colour scheme in this election. This kind of Red-vs-Blue, Liberal-vs-Tory story is simply easier for some to understand. It also makes clear a CAQ victory, beyond putting a former (and maybe still current) Separatist in power, would also put a decidedly right-wing party in power in Quebec.
Posted by TheNewTeddy at 7:31 AM 6 comments:

Looking to the past for a Ford analogue

I'm going to direct you to a post I wrote over a year ago that was originally in response to what Trump would be like as President.

In short, as a spoiler, Ford is like Australian Premier Joh Bjelke-Petersen.

When police were caught on TV assaulting a protester by hitting her on the head with a baton, Joh gave them a pat on the back. The protesters, enemies of 'order', were the bad guy. This plays well because the majority of people who vote have never taken a part on any mass demonstration of this sort. They can not identify with the protester, but they can identify with fear. Who is it they fear? Not the policeman, who is their neighbour, their friend, but with the protestor, who is behaving in a way that seems incomprehensible.

Joh's control was in the press. While he did not force opposition off the air, his strategy was one of a showman. Joh used television to gain control not of the executive machinery, not of craftily devised legislation, but to gain control of society and the voters themselves.

Hence all the "fake news" out there these days.

Posted by TheNewTeddy at 10:30 AM No comments: