This is part of a post I've been working on. I've been waiting for days for Putin to make this plans clear, but, clearly, this is not happening. As such, I'm going forward with the meat and potatoes of the post I was planning: 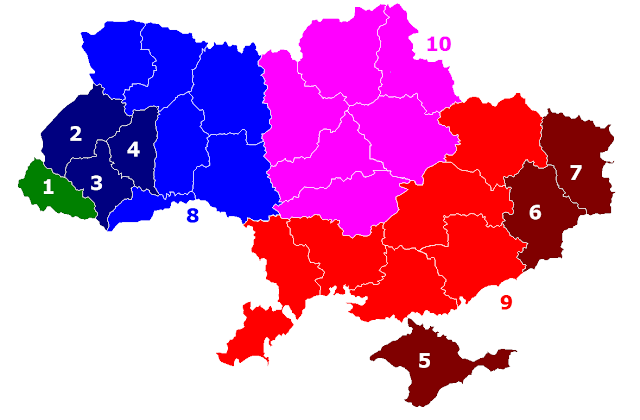 This map shows the various regions of Ukraine, as defined by me, for the purposes of this post.

1 - Zakarpattia Oblast (County/Province). This Oblast is unique. Some Hungarians and Romanians live here, and this area was part of Czechoslovakia until WW2. It does not behave in patterns that match the rest of Ukraine politically; As such, I'm effectively excluding this Oblast from this discussion.

2 - Lviv Oblast. Core of the "Pro-Europe" and Pro-West sentiment in Ukraine. It is, by far, much more pro-west than any other part of Ukraine.

3 - Ivano-Frankivsk Oblast. Along with its northern neighbor, part of the the Pro-West area of Ukraine.

4 - Ternopil Oblsat. This is the 3rd Pro-West area. While not as fanatical as Lviv, these 3 would likely never want to live under Russian rule. These 3 were all part of Galicia, part of Austria-Hungary, in WW1.

5 - Crimea Oblast. This has been part of Russia since the 2014 annexation.

6 - Donetsk Oblast. Half of this Oblast has been ruled by the Pro-Russian "Donetsk Republic" since 2014.

7 - Luhansk Oblast. Half of this Oblast has been ruled by the Pro-Russian "Luhansk Republic" since 2014.

8 - This area is generally west leaning.

10 - This area has swing between Pro-Western and Pro-Russian sentiments.

If an honest, free, fair referendum had been held, in 2013, in Crimea, Luhansk, and Donetsk, they may well have voted to join Russia, or, they may not have. The idea would have got at least 40% of the vote, however, in these areas.

If a referendum were held in Lviv, Ternopil, and Ivano-Frankivsk, they likely would vote over 95% to join the EU.

I will continue this post with the actual conclusion once it becomes clear what Putin is trying to do. I apologize for splitting this post in 3, but I can't for the life of me, figure out what Putin is up to.

Posted by TheNewTeddy at 7:52 PM No comments:

This is a pre-post; in advance of a post coming up, about Ukraine and the west vs east split. I wanted to get some citations for it. The citations basically are simply the past election maps. All of them. Votes for all candidates, in all elections. I've selected a few that make good examples and present them below:

Posted by TheNewTeddy at 2:24 PM No comments:

more to come with time. Invasion will likely be limited in scope. will update as more becomes available

Posted by TheNewTeddy at 10:44 PM No comments:

It is my educated estimation that Russia's original plan was as follows:

Step 1 - Hold training exercises. These would simulate a Russian attack on Ukraine. It would have all the parts needed to actually invade Ukraine, but, would not invade Ukraine.

Step 2 - Ukraine, fearful of an actual attack, and seeing that the glorious Russian army is able to crush their nation, becomes much softer in it's approach.

Step 3 - Glorious Mother Russia can then recognize (and later annex) Donetsk, as well as get all of Ukraine into the fold as a puppet nation after the next Ukraine election.

However, they did not expect the EU, NATO, and the USA to become involved.

Their little 'demonstration' to 'scare' Ukraine into 'compliance' has turned into a potential war involving Europe.

This has backed Russia into a corner of sorts, and the only way out may be to actually invade Ukraine, with the hopes that it can be taken quickly enough that Russia can achieve it's objectives before the EU/US/NATO can respond.

What Russia does remains to be seen

Only one thing I want to mention here, and it's not even the use of the emergencies act. It's the "Battle of Billings Bridge".

This "Battle" was simply anti-convoy citizens coming out to blockade the convoy.

Why is that important?

Because, instead of being Citizen vs Government, the demonstrations became Citizen vs Citizen.

There was no violence at said "battle", but, I fear the concept of "Citizen vs Citizen" will become much more commonplace in the coming decade or two, and in these future confrontations, in Canada and more so, elsewhere around the world; I do expect violence. "Mob Justice" will become "Mob vs Mob battles"

I hope I am wrong.

Posted by TheNewTeddy at 7:11 PM No comments:

Soft and Solid, impacts of the Ottawa demonstrations

Call it a "Freedom Convoy" or an "Occupation Blockade", but the demonstrations in Ottawa have changed quite a lot, politically, in Canada.

A problem I'm seeing, is people are looking for places where they won't see that change; political polls.

This demonstration has not changed any Tories into Liberals or New Democrats into PPC members. What it has done, is made massive changes to the various groups that swing between these parties election after election. I want to go through them and examine this.

To those who are anti-vaxx, this has solidified any drift that mandates were having. We've seen people who have previously said they would never get vaccinated, get vaccinated. We will see much less of this going forward. Those who remain without shots are now much less likely to get them, regardless of any mandates. In fact, I'd suspect some who only have one shot, will decide that's all they need, and those with two, will decide against a booster. This may be a small share of the population - around 15% - but it will impact some vaccination statistics. Politically, it will solidify their position within their parties, be it the Conservatives or the PPC, with an important caveat; it's solidifying them as anti-vaxx politically. Should the Conservatives swing to become more appealing to anti-vaxx voters, this group will respond in kind.

To those who support mandates, this has also solidified their view. In particular, those who might lean right, now view the Conservatives as unacceptably right-wing due to their perceived anti-vaxx stance. These people will likely stay home and refuse to come out to vote, or, if they do vote, may back minor parties. This will reduce the maximum number of votes the Conservatives can access in the next election.

Those who have generally supported mandates, but who have been concerned about the harshness of some mandates, have been greatly softened. None of them are currently changing who they are voting for, but, future actions will see them move. This is why governments across Canada are moving to end restrictions. Not to satisfy the demonstrators, but to ensure that this group, the mushy middle, remains content. When this group is on the side of the restrictions, we have a clear 8-to-1 overwhelming majority supporting the status quo. When this group suddenly backs off, that clear overwhelming consensus turns into something closer to a 2-to-1 majority, which is far less able to build a true consensus.

Those who have generally opposed mandates, but who have gone along with them, are also softened. Some are offended by the demonstrations, while others are questioning if they'll continue to follow the rules. In particular, they've become very sensitive to the actions of the political parties on these issues. They do want Covid to end and do trust vaccines and science, but don't want what they see as government over-reach. Until now they've been locked into whatever party they've happened to support as there was simply no alternative, but now, with parties moving and shifting about, reacting; they are liable to start moving and shifting as well, from where they currently are, to alternatives they are comfortable with, but that support their concerns about government powers.

The previous election, and, previous culture debate, has this radically changed. This has gone from a united society with an opposing radical fringe, to one that is actually and truly divided.

If you look at political polls, you'll see that the numbers have not changed. The context of those numbers, however, will no longer be the same.

Posted by TheNewTeddy at 3:42 PM No comments:

We'll start small and move on to larger topics:

Northern Ireland has seen the first minister resign. I'll follow up on this in future posts, however, it's likely the lack of an a first minister will remain until the spring election.

Elections are coming up in March in the Saarland, a state of Germany, where the Social Democrats are leading the polls, and could see an SDP-Green government elected.

The state of South Australia is also holding elections in late March. 2PP polling suggests either no change or the most minor of changes; but, the polls are also close, 51%-49%. I'll be posting more on this as the election approaches.

Portugal held elections this past week. The ruling Socialists have gained seats, and appear to have nabbed the slimmest of majorities. This is the first majority since 1995, and the second since 1991. Other majorities include 1988, 1980, and 1979. These 6 majorities contrast with 11 minorities since the end of the dictatorship.

Finally we get to politics here at home in Canada.

O'Toole is out as CPC leader. The big divide in the party is between more moderate members, and more extreme members. The right-wing has a massive advantage at the moment, and it is almost certain that the next leader will be more right-wing than O'Toole was. Poilievre and Lewis are two names that come up often. I'll be doing many posts on this as the tories pick a new leader.

I also have an eye on Alberta, and Ontario, to see how these recent trucker protests will impact these governments.

Posted by TheNewTeddy at 11:48 AM No comments: