Voting continues, but we have a good idea of the final results. Trump has already won the 270 he needs, but there are other 'winners' as well.

Colin Powell is the surprise 'winner', taking 3 votes from Washington.

John Kasich is also a winner, taking the expected single vote from Texas.
Or possibly;
The John Kasich vote expected from Texas never materialized.
Texas is the state that put Trump over the top; without it, he would have failed to take a majority, and would have been left with 268 votes.

But the surprise winner is Faith Spotted Eagle. You can see a video of her here from CNN.

As far as I know she's the first native person to win an electoral vote in US history.

There still could be faithless electors from states yet to declare such as California, Nevada, Hawaii, or the District of Columbia; which voted earlier but has yet to publish results. Even if all of them, and, the electors from Texas, voted for the same person, they would be unable to overtake Clinton. As well, if even 2 Texas electors vote for Trump (all signs are at least 37 will) it's all over, and Trump is the winner.

All of these votes will need to be read and certified in Congress, of course, but it's terribly unlikely that what was put into the envelope in the state capitol and what's read in Congress will be different.

Current map is as follows: 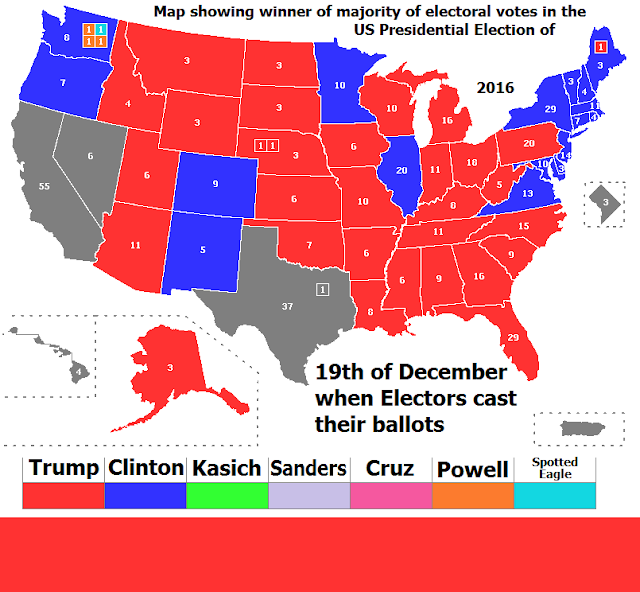