We are into the winter doldrums for politics, but there are a few minor updates.

The czech and icelandic coalitions are now in place.

I've also run some quick numbers for Italy, and the basic poll average (in terms of seats potentially won at the next election) is as follows:

Izumi Kenta has won. Mr. Izumi was the furthest 'right' of all the candidates, having stuck with Kibo and the DPP until the final merger. This may indicate a willingness to re-unite and heal the party.

Posted by TheNewTeddy at 12:15 PM No comments:

Perhaps the most report worthy thing is that Japan's CDP, its main opposition, is electing a new leader, and the 4 main candidates have emerged. The best way to classify them would be by how they reacted to the party split in the last election. Nishimura stayed with the party. Osaka became an independent. Ogawa became an joined Kibo. Izumi joined the DPP. No polls yet indicate how popular any of them are.

Posted by TheNewTeddy at 8:06 PM No comments:

The only major update today is the Bulgarian election.

Results are not complete yet, but it appears that the results will be as follows:

This gives 108 seats for the anti-corruption parties, 92 for the two most traditional parties, 27 for the social democrats, and 13 for the nationalists.

I want to contrast this with past election results: 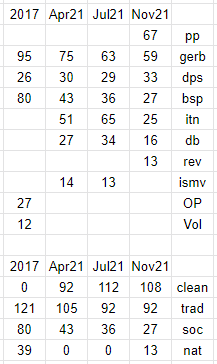 I'll try to analyze this more in future posts; but for now, I will say that its quite possible we'll finally get a government this time. PP and DB want one. BSP is also seemingly willing to support them, and, PP and DB seem willing to allow that. This would be only a dozen or so seats short of a majority. It is quite possible that they could try to run this as a minority. However, ITN may support them. I will want to speak about ITN in my next post (when final results are out).

For now, this is all.

Posted by TheNewTeddy at 12:22 PM No comments:

The Czech situation has resolved, with the President able to speak from the hospital. He's confirmed he will appoint a SPOLU-PaS coalition, which, will confirm it's new government next week. As such, I've decided to stop following the government formation unless something changes.

Bulgarian polls have settled down. Currently, polls suggest the following:

How that would turn into any potential government coalition remains to be seen.

In South Africa, municipal elections give a hint at what the next election might look like. In particular, this is a rough estimate. Note, the number in brackets indicate the result in the last election.

If this plays out, the ANC will be sitting on a knife edge of a majority.

Posted by TheNewTeddy at 8:48 AM No comments:

Not much to update. We did get one poll in Israel showing Yamina below the threshold, but that is an outlier. There is an election coming up on the 7th in Montreal, but I've not been following it very close. Otherwise, the only new updates are from Japan.

Japan has re-elected its current government.

The LDP, under new leader, Kishida Fumio, took a left turn and ran as a far more moderate party than it had under Abe Shinzo. This is reflected in the poor results for the left-wing CDP and strong results for the right-wing Ishin party.

The results were as follows:

Others, are 3 seats for Reiwa (progressive), 1 for the SDP (social democrat), and 10 Independents (various, mostly liberal/progerssive).

The government, thus, lost 20 seats, but, kept the 'left opposition' roughly the same size, by losing seats to the right-wing opposition parties instead.

Events can happen in the few days following an election in Japan, so, I will keep my eye on things and let you know what changes, if anything.

Posted by TheNewTeddy at 2:04 PM No comments: