Keeping and eye on North Macedonia. Seems like any coalition will be a hard sell. The DUI is proposing some truly insane things in return for their support; in particular it seems they want some sort of block vote for Albanians.

For those who don't know, the block vote is what the US uses for Presidential elections. If you win a state, even by a single vote, you get all the electoral college voters. The DUI it seems wants the single most winning Albanian party to either get all the Albanian seats (which would be around 25% of all seats or more) or to somehow legally prohibit the other Albanian parties from having any power.

Also keeping an eye on many other locations. New Zealand's National Party is now lead by Judith Collins, and I'm trying to understand the dynamics of that. As far as I can tell, Collins challenged Bridges early in the year, but failed. Later, Muller challenged Bridges and beat him, thus making Muller the leader. Muller then resigned only a few weeks later, and Collins won the leadership election.

The lead that Labour held over the National party prior to Covid was around -5 to 5 points according to the polls. After covid, the lead jumped to 24, 36, and 30. It was here that Muller became leader. The lead was then 30, 27.5, and 12. Only one poll has been taken with Collins, showing the lead at 36 points; that being Labour at 61% of the vote and the National party at 25%.

Internal polls for National (at least, the ones they've released - ergo, the best polls for them) show the gap down to 11 points.

The Best PM polling shows that Bridges never reached higher than 12%, and Muller 13%. Collins only has a single poll but it shows her near 15%. This is the highest reached in such a poll since February of 2018, excepting the sitting Prime Minister, Labour leader Jacinda Ardern, who has not been lower than 37% in that entire time.

On a side note, Winston Peters, and his party, are polling very poorly as of late, and the party may be wiped out in the next election is this does not reverse itself. While the party has been wiped out before, in 2008; he had been Foreign minister at the time. If this plays out, it would mean the two times he entered an election as a cabinet minister, his party got wiped out. Unlike 2008, however, Peters is now 75, and may not be willing or able to return.

Posted by TheNewTeddy at 11:49 AM No comments:

A very late map, I made, showing the new coalition and where it does and does not have members of the parliament: 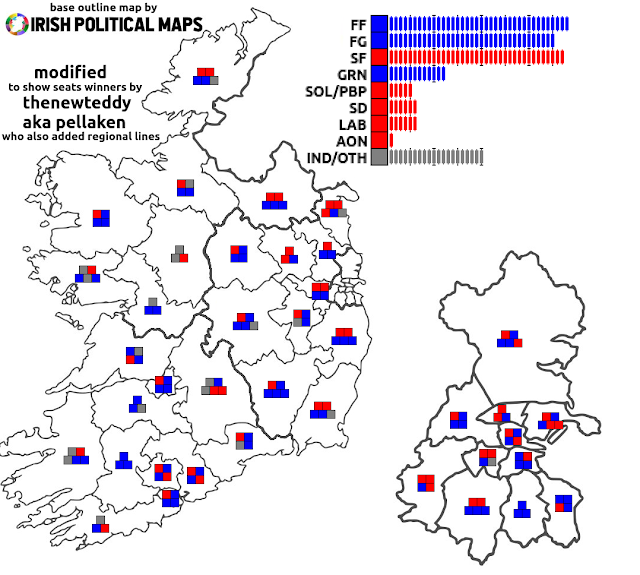 Blue is the new coalition. As you can see, most seats have at least one government and one opposition member, but not all.

Counting still ongoing, but, 99% complete; current standings are as follows:

Underlined parties are Albanian, Parties with a yellow background are the government. In short; it looks like the Government has been re-elected with the narrowest possible majority.

The referendum passed with flying colours; with all the normal caveats about the legitimacy of results of elections in Russia in mind. Interestingly, one sub-region voted against. This sub-region had been due to merge with a neighbouring region (technically, the subregion is a subregion of that region; a bit like if Labrador had a territorial assembly; its part of Newfoundland and Labrador, so, you can think of the move as akin to telling Labrador it would lose said assembly). It's generally accepted the "no" vote was in protest of this move, and as a result, the subregional governor resigned, and the merger was called off.

Duda, the incumbent, has won the election with around 51% of the vote. The closeness indicates that Poland is anything but comfortable with Duda and his policies, but also indicates that for the time being, said policies do have the support of the majority, even if a narrow one.

Two regions of Spain held elections on the 12th. Both saw the incumbent re-elected just as the polls suggested. The "long story short" simply being that there is no story to tell, which is true for some of the other goings on in politics as of late.

The polling here is interesting. Not the polling for the upcoming election, but the polling for the one that was completed earlier this month. Polls suggested that the Social Democrats would win by about a dozen seats. Instead, the Conservatives won by about two dozen seats. I will want to address this more later, but, it could simply be that in these covid times, incumbents (who do well dealing with the virus) tend to be re-elected.

Related to the above, the Liberals are polling quite well. I've seen suggestions as of late that the Tories should shut down their party. That is ridiculous. The Liberals themselves were once in 3rd place federally, and came back to win a majority in the following election. Any suggestion the Tories should fold due to current polling lacks foresight.

The opposition has continued to make ganis, with the government taking a low 61.24% of the vote. Singapore uses the block vote system, similar to the US Electoral College. The winner in any constituency is then able to obtain all of that constituency seats. The opposition Workers Party has managed to win three such areas, totalling 10 seats. While the government has taken a lower vote share before, this is one of their weakest showings since independence. Meanwhile, this seems to be the first time any opposition party has won three separate regions, and, the highest number of opposition members ever elected. The seats come from the same area the Workers Party has been electing members for over a decade; the area has been outlined on this map.
Posted by TheNewTeddy at 2:40 PM 4 comments:

Just a quick update, as, I've noticed my last post was some time ago. Basically I've not had the time to write, as I've been taking some personal time. There are things I'd like to look at, including but not limited to...

The Hungarian minority party in Serbia
Results of the Russian referendum
Polish presidential election (Jul 12th)
Singapore election (Jul 10th)
Polling for the election in Croatia
And lastly, pending the results on Jul 12th, the elections in Galicia and the Basque Country.

Posted by TheNewTeddy at 6:53 PM No comments: