A week from today, the Electoral College will select the next President of the United States. As you know, I've been trying to keep a map that details the current standings.

Currently there are 7 electors who, in some form, say they will become faithless. That is, vote for someone who did not win the popular vote in their state or district. Of those, in all likelihood, there's a very good chance that half or more will not act as claimed. They may vote for the person they were elected to vote for, or, they may simply abstain. Despite that, these electors have unofficially indicated their support for John Kasich.

Most of them are Democrats. The thinking is that by committing to vote for a "moderate" Republican, they can entice Republican electors into doing the same. Should no one candidate get 269 votes in the electoral college, the House of Representatives will have to pick from the top three candidates. These electors feel that should Trump be on the ballot facing a moderate Republican, that the Democrats in Congress will vote tactically for that moderate, and, that enough Republicans can be swayed to do the same, that Trump can be blocked from becoming President.

Legally this plan is sound. Strategically it's flawed.

I've taken every last rumor of any electors being even slightly irked and have developed this "Worst" case scenario map: 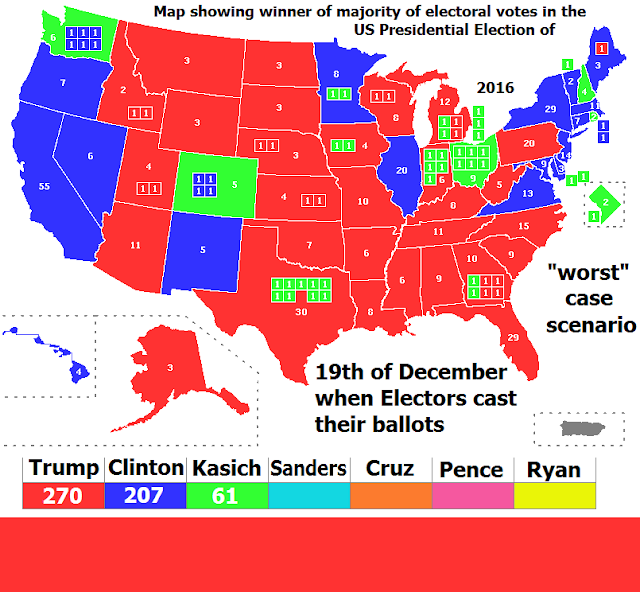 As you can see, there are many changes to the results as they were cast by the voters.

Two things to note from this map.

First, even with this most extreme of circumstances, Trump would be elected President by a majority of the Electoral College.

Second, a heck of a lot of stretching has to happen for this to even become possible. At absolute maximum, I've heard of 3 texan electors who are unhappy. Of those, 1 has said nothing in a while. 1 has resigned and been replaced with a pro-Trump elector. And the last is part of the group I spoke of above. To take 1 confirmed elector and expand it to 9 is lunacy, yet that's how far I need to go to make this map even possible.

Note as well that for this to happen Kasich would need to sway strong Pence voters from Indiana, who have shown 0 sign of any desire to switch. As well he'd need to tap into supposed discontent within Michigan, Iowa, and Georgia. Again, all these reports were "iffy" at best. Lastly, he'd need to sweep Ohio, which will be difficult to do when he is explicitly telling people to knock this nonsense off.

I even had to make similar sized assumptions for the Democrats. Minnesota in particular has lost 2 electors, not due to any rumors, but because "That's the sort of thing Minnesota would do." - very weak grounds for suggesting such an unprecedented change in electors. Outside of New Hampshire, which seems united in it's desire to flip the result, only one Democratic elector from RI, and one from Maryland, seem committed to this. Meanwhile, 3 electors, total, in Washington are debating doing 'something' but that 'something' may include voting for Bernie Sanders, or, as mentioned above, abstaining.

Regardless, I present the above map as a "possibility" alongside Justin Trudeau announcing that he has secretly been Frank McKenna all along, and Gerry Adams being installed as the new King of England.
Posted by Unknown at 11:09 AM