I have a new prognosis (projection) for the ontario election. 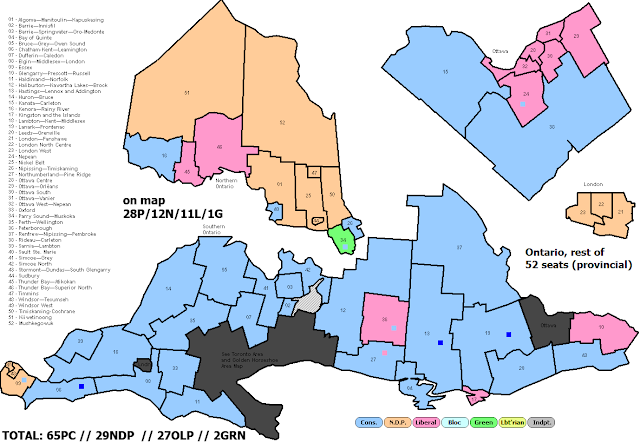 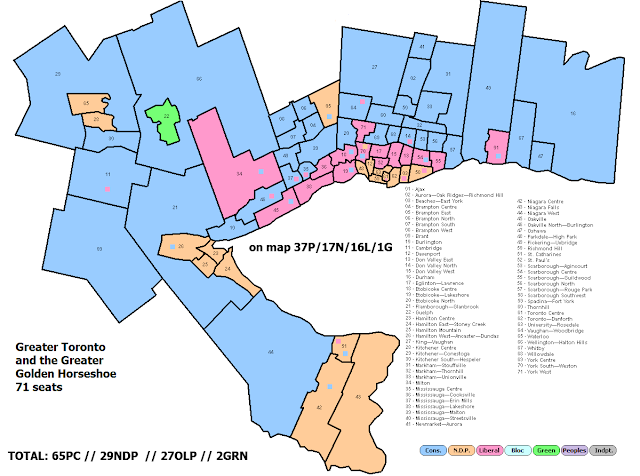 Not much to say about it, heavily based on math, with the vast majority of the work being shown via twitter posts. Will comment on it's meaning, before the election.

Posted by TheNewTeddy at 2:35 PM No comments:

Just a quick numbers post; on the results of the Australian election, which are still being counted.

Current topline results from the ABC show the following:

but we can do better than that.

This, I think, is a far more useful way to look at things. It includes the in-doubt seats (1 green, 5 labor, 6 coalition) and breaks the teal independents off from the remainder of the independents (interestingly, the teal flavor seems to have taken more votes than all other independents combined!) I went through the 22 seats they ran, and simply added the first round vote result to determine this.

This makes the same assumptions that the above list for the House result does. Interestingly, the Teal Independents could still win a seat, pending how the count goes in the ACT. If so that seat would come from the Coalition.

One thing you may notice is the Sensate would be split 36-36 for both the left and the right. If the count holds, it will be interesting to see how this plays out, even if not really unprecedented.

Posted by TheNewTeddy at 12:22 PM No comments:

In the Philippines, Bongbong Marcos has been elected as President, along with his running made, Sara Duterte. He's taken roughly 46% of the vote. His main opponent was the sitting Vice President, Leni Roberdo. She ran as an Independent, and took about 22% of the vote. The next closest candidate, Manny Pacquiao, took only about 5% of the vote. All of this is from unofficial tallies.

Sara Duterte has been elected Vice President, with ~47%, slightly more than Marcos. Francis Pangilinan took ~13.5%, he was Roberdo's running mate. Tito Sotto is the one who really beat expectations, taking ~12% of the vote. He was the running mate of the 4th placed Presidential candidate.

Sotto is a Conservative. Pangilinan is where we run into the first complexity in covering Philippine politics; family. Let's look at how this 'works'.

For example, Incumbent President Rodrigo Duterte was part of Laban, but founded PFP. Bongbong Marcos backs PFP but both were supported by Lakas. Sara Duterte is running with Lakas, not PFP. This continues historically; Ferdinand Marcos, the dictator, was part of the Nationalist party, which is the same party his opponent Corazon Aquino, the opposition leader he had assassinated. In short, 'party' is not as important here as which 'side' you are on in terms of family disputes.
Knowing who are what "Lakas" is, thus is far less important than knowing which "side" people are on, and the major "side" that won here is "Marcos"
Bongbong Marcos is on the "Marcos" side, while people like Roberdo and especially Pangilinan are closer to the "Aquino" side.
Meanwhile in Germany

The Schleswig-Holstein election, as mentioned, returned the governing CDU as the largest party. One seat short of a majority. By default, the party would want to reach out to the FDP, the Business-Liberal party. However, the local CDU leader may be a moderate, who might wish a coalition with another party. One interesting option is the SSW.
SSW is an ethnic minority party. In 1947, the party took 9.3% of the vote, and, in 1950, they took 5.5%. Between then and 2022, they never got over the 5% threshold. In 2022, they took 5.7% of the vote.
As a minority party, the party wins seats regardless of the threshold. The party represents minority Danish interests, and has generally centrist liberal policies.
If the SSW and CDU can come to an agreement, it could be an alternative coalition. The parties, however, have some distance between them on certain issues.
It is always possible the CDU will try to sit with the SPD or the Greens for some reason, or, try to govern 1 seat short. Regardless, I am following things.
In Northern Ireland
There's no sign yet that a brand new agreement is in the works. As such, it may be most realistic to look for adjustments to the existing agreement, similar to how the Belfast Agreement upgraded the Good Friday Agreement. There's nothing new to update just yet, but I want to make clear I am following things, and will let you know if and when something develops.
Elsewhere
In the UK, local elections were held. It is difficult to judge exactly what these things mean as only certain areas vote at certain times. Comparing this to the 2018 results (same seats), Labour continues to rise. It is in other years that the Conservatives do much better.
It is far more useful to look outside England. Scotland saw the Tories down, losing ~60 seats, with all the other (major) parties gaining. Wales has a much more direct change, with the Tories losing ~85 seats and Labour taking ~65 of them.
As always, I continue to monitor polls in various countries. There's nothing to update in Israel, Italy, or the republic of Ireland.
In Australia, polls seem to think that a 54-46 split may be where things settle. This would result in a Labor government.
Lastly, here in Ontario, I am following things. However, at this time, there's nothing much to comment on. I expect that by this time next week I will have a much clearer view on what may be happening.
Posted by TheNewTeddy at 11:29 AM No comments:

Full Northern Ireland results are in.

With these results, there are 3 possible options.

1 - Return to the norm. This would see the basic structure of government outlined in the Good Friday Agreement. (AKA The "Agreement"). This simply means a new 5 party coalition, with a first minister and deputy first minister from Sf and the DUP respectively.

2 - Remain broken. Before the election, there was no sitting executive. The DUP first minister had resigned. This, if it continued for some time (say, more than 6 months) could lead to more extensive negotiations.

3 - A new agreement. This is what I expect. The parties, I think, are ready to talk now, and not wait. Exactly what will change remains to be seen, but I suspect the current double majority system will see an overhaul, if not be replaced by a qualified majority. I plan to address this further in a future post.

In Schleswig-Holstein the CDU appears to have been re-elected, with 34 of the 69 available seats, meaning it can drop a party from it's existing coalition with the FDP and Greens. The Greens took 14 seats, the SPD 12, the FDP 5, and the SSW took 4. I may expand more on this later.

Lets start in Mid Ulster. On the first ballot, SF has gained 1 seat, that of it's leader, Michelle O'Neill. However they have two other candidates very close to the threshold, and, will all but certainly pass the threshold on transfers. More interesting, is the DUP, which is closer to the threshold, under 100 votes. My "projection" had the DUP losing this seat to the UUP. The UUP is far, far behind, behind the TUV even. This likely means the end result is, in terms of party seats won, the same as last time.

In East Belfast, the UUP has outperformed the TUV, and so, it looks like there will be no change in the party makeup here.

In short; things are "chaotic" vs the simple party vote transfer that I did in my projection. Parties are up in one place, down in another. As such, I'm going to use these early results to make a new "projection"

Posted by TheNewTeddy at 11:00 AM No comments:

I did some quick math, based on yesterdays post, to make a "projection" of how things may turn out.

East Londonderry, Fermanagh and South Tyrone, Lagan Valley, and Belfast West, would see no change to the party representation of the 5 members they each send to the assembly. South Antrim also would see no change, but, only because the Alliance has failed to run a second candidate. If they'd chosen to do so, these numbers suggest they'd take a seat from the DUP. However, they did not do so, so, no change.

North Antrim may see the TUV take a seat from the DUP. However, pending TUV vote strength, there may end up being no change, but, a TUV gain is slightly more likely than not.

Belfast South is also only "likely" to see a chance, with the DUP likely losing a seat. If it does, the Alliance could take it, or, the UUP may, but, the chances are higher the Alliance does.

These two changes would see the DUP down by 2, and the TUV and APNI up by 1, with an outside chance the TUV and UUP each gain 1 instead, or, the DUP simply retain both seats.

Belfast North is another place the DUP may lose a seat. However, the SDLP is also vulnerable. The Alliance will almost certainly win a seat here.

East Antrim, North Down, and Strangford both are nearly certain to see the DUP lose 1 seat each to the Alliance.

West Tyrone, Mid Ulster, and Newry and Armagh, are both near certainly going to see the DUP lose 1 seat each to the UUP, simply due to DUP vote weakness.

Foyle is nearly certainly going to see the DUP lose a seat to PBP.

The DUP is near certain to lose an East Belfast seat. the question is to whom. I have the TUV pegged as the likely winner of that seat, as the Alliance, which otherwise would win, already has 2 seats here.

South Down is also a near certain DUP loss, but this time it is the Alliance that is more likely to pick up the seat, over the UUP.

Upper Bann and Belfast North are both near certain Alliance gains, but the question is, from who. most likely the DUP in both seats, but they could also take the seat from the SDLP.

This would be a major shift in politics in Northern Ireland. It remains to be seen if this is indeed how things will play out, or, if this over-estimates the number of seats the DUP will lose to the Alliance.

Posted by TheNewTeddy at 4:24 PM No comments:

Just a quick post, where I'll detail polls for the coming NI election.

Previous election vs most recent poll

I summarize this as follows:

SF, UUP, SDLP, GRN, and PBP are all, roughly, where they were last election. As such, in any quick 'rule of thumb' 'educated guesstimation' of an election prediction; you can expect them to maintain the same vote level in each constituency.

TUV and APNI are up by double. Meaning in such a guesstimation you can expect their vote total to double in each constituency.

DUP is down by a third. As such, you can guesstimate that in each constituency they will lose one third of their vote.

Posted by TheNewTeddy at 12:05 PM No comments: