On my previous post; is an NDP majority a joke?

I've had friends suggest my last post was a joke, or otherwise simply not serious. I want to detail why this is not the case.

First of all, take a look at this fresh poll https://www.scribd.com/document/377750375/Mainstreet-Ontario-Apr30 (as in it came out 30 minutes prior to my starting to write this post)

Go to page 6, and look at second choices.

Additionally, NDPers are the most likely to change their mind. Normally the media will tell you this means they will do poorly, but in the elections I've seen in the past decade, more often than not, parties with low 'very certain' numbers are actually the ones that 'swing voters' are rushing to. This does not indicate that the core NDP voter is debating voting Liberal, it indicates that the core NDP voter is being swamped by people who are swinging to the NDP for this election and, perhaps, this election alone.

Horwath has as many positives as Ford does, but half the negatives.

This is just from one poll that came out under an hour ago. Other polls show similar numbers. What I'd like to remind everyone in terms of context is this

On April 7th the writ was dropped. Polls showed them at 26 and 28. Once polling got into full swing, the party never dropped below 30.

The party nearly doubled its vote totals, according to the polls, in a very short period of time before, during and just after the writ being dropped.

Now take a look at this.

In March this started to change a bit, and now, as we look at the second half of April, we see the NDP on the rise.

The 5 most recent polls have them at 26, 27, 21.3, 28, and 20.7. More importantly is they show all the signs of being able to potentially grow, whereas both the PC Party and Liberals show signs of potentially being closer to the top end of what they can achieve, with voters picking one due to hate of the other as opposed to actual support of their option.

I also caution against the 2 month average wikipedia provides. One reason why I have historically consistently outperformed other bloggers like 308.com is the fact that I use much smaller poll averages, of 5, or at most, 10 polls. This allows me to pick up swings and trends and momentum. Consider that a 2 month average, a week prior to the call of the 2015 Alberta election, would have had the NDP under 20 points.
Posted by TheNewTeddy at 7:59 AM No comments:

If the current trends continue, the NDP is set for a Majority. 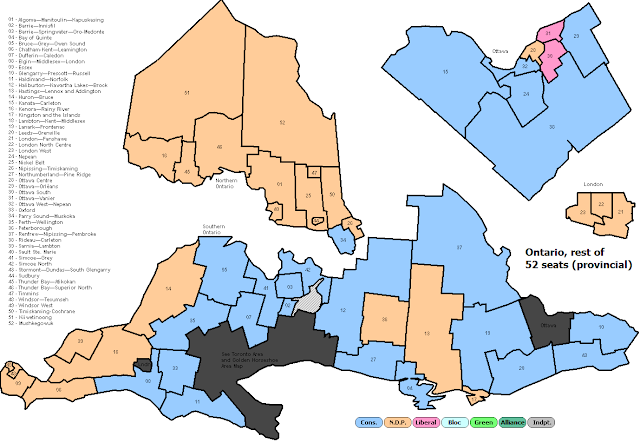 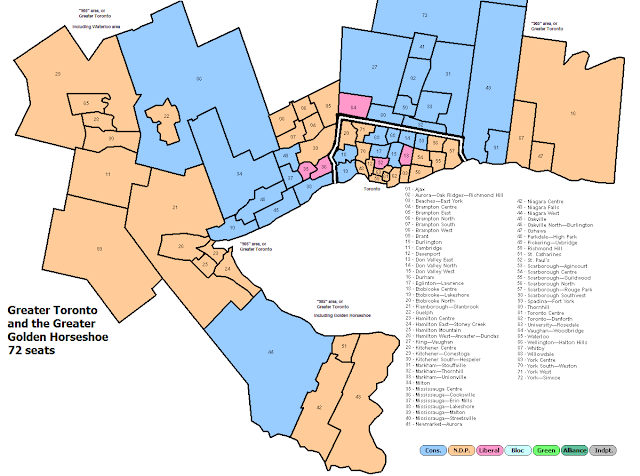 Posted by TheNewTeddy at 3:44 PM No comments:

Just a quick and short post that I'm in a bit of a mini transition in my persona life at the moment and that this has thrown my schedule out of whack. I still do plan for the longer posts for the upcoming elections.

In terms of the coming Mexican election, I wanted to provide some context to prepare for; all signs are pointing to a massive and easy victory for Obrador. Some context on who that is and what that means will be coming in a much larger post.
Posted by TheNewTeddy at 9:48 AM No comments:

Quick note on the Ontario Election and my feeling about it

What's going to really nail it down is what the polls do by, say, May 19th. If by then the NDP is not a strong second and growing, then we are looking at a huge PC Majority. I simply suspect the NDP will, by May 19th, likely, be at 30% and increasing.

Should the NDP not take off, we are all but certain to have a very large PC majority, with the Liberals likely to be reduced to a dozen MPPs or less.

Also, yes the other previously mentioned blogposts are coming. May will be a much more full month with many posts. I've been dealing with more personal drama which has mostly wrapped up.
Posted by TheNewTeddy at 11:35 AM No comments:

Note that I will be making a few posts between the 22nd and 30th, but will likely not have time for any prior to this.
Posted by TheNewTeddy at 12:47 PM No comments:

Lets get right into the results

There is some talk of MSZP, DK, and possibly even LMP forming a coalition in opposition to prevent the lead opposition role from going to Jobbik, but weather or not this materalizes remains to be seen.

In short, this is in line with what was expected, and as such, there's not much to say that's not been said already elsewhere.


Expect posts soon on the upcoming election in Mexico, and a post explaining how and why politics now is different from what it was in, say, the 1980s.
Posted by TheNewTeddy at 8:57 AM 2 comments: