The below is not a prognosis, or a projection. It's far sloppier. It's my semi-random thoughts. There is always a chance I misclicked a seat or two, but those seats will always be unremarkable. Most of my errors, so far, have been from misclicks. Once I even accidentally put an NDP seat in Moncton instead of Saint John for a NB election. Clicking too fast and not paying attention.

This is a map I've not paid attention to.

That does not mean its useless. Except for any misclicks (and history shows I can make as many as about 1 in every 300 clicks) the seats you see are accurate. However, I am not giving this my "I've not misclicked any seat" seal of approval. That means I'm not interested if you do find a misclick. A seat that obviously should be for one party, but isn't for some reason. Additionally, this are my sloppy thoughts. I don't have any deep thinking on any of these seats. As such, if you say "this is wrong" I'm liable to say "okay" and move on. I am uninterested in discussing any of these seats.

All of these are gut calls. I've taken a look at election.de and other projection websites for Germany and just kinda 'shot from the hip' in deciding which way to resolve things when sites disagree. There's no heavy math behind any of them. Maybe one seat, I said "eh, I think X will win it, and since Y is supposed to win by only 7%, I'm gonna flip it" while in another seat I've said "hmmmm... naw 7% is too much for a flip."

Regardless, here is the map: 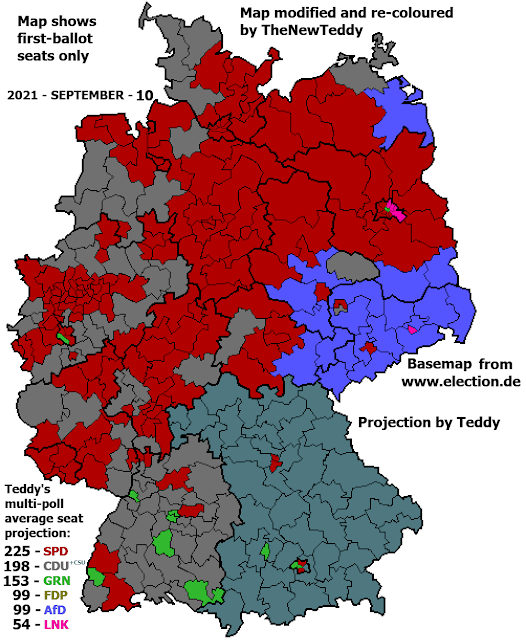 As you can see, the numbers obviously do not match the seats on the map. That is because, as I explained here, Germany elects half (or more) of its MPs via proportional representation, and this map only shows the geographical constituencies that elect single members via FPFP.

I wasn't intending on ever sharing this map on this blog. However, I wanted to make clear that I often have maps that reflect my thoughts that are never meant to reflect my work. When I intend for the maps to be a reflection of my work, I explicitly say it is a projection in the text. Not on the map, but in text. I understand that this can be confusing, and this is why I'm introducing that new word "Prognosis" into my repertoire. It's a word I'm aware of, but have hardly ever used. This will help differentiate when I am sharing something I consider reflective of my work, and when I'm just sharing something that I am sharing that I consider reflective of my thoughts.

Yesterday, on twitter, and here, I was unclear about what my maps, and my post, were. I will be more clear on that in the future. For the rest of this month, and, potentially, to the end of the year, I will explicitly declare what I'm sharing is, and, what it is intended to mean. At the end of the period, I will make an individual post that simply clarifies this, so that I can point to it in the future.

Posted by TheNewTeddy at 9:00 AM