Iceland goes to the polls at the end of this month. I've done a post before looking at some history. I wanted to introduce the current situation. 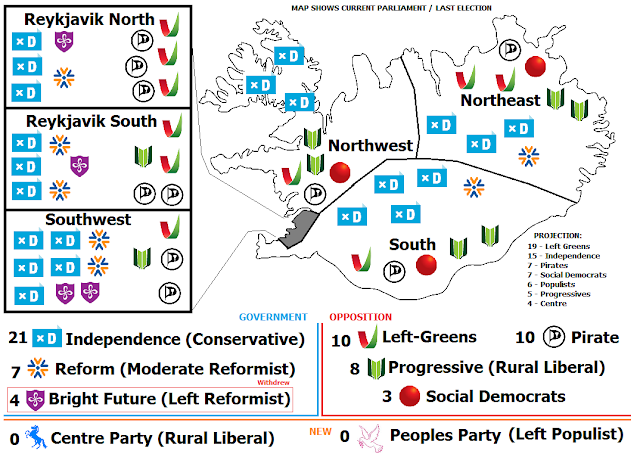 This map shows the results of the last election and, thus, the current Parliament. As you can see my projection is included on the map, I will go into greater detail about it at the bottom of this post.

Iceland has a number of parties, and the turnover in new parties since the economic crisis has increased. The most recent government collapsed causing this snap election. Exactly why is a bit complicated as it's rooted in certain legal and civil procedures related to Icelandic culture. In short, the father of the Prime Minister supported a convicted pedophile in trying to clear his record. When revealed Bright Future withdrew from the Government, and a snap election was called as a result.

The parties are a bit complicated, so I will explain.

Independence
This is the current Government. They are generally right-wing and seen as conservative. They are one of the two historic largest parties. They are current suffering from the scandal listed above, but are still polling rather well.

Reform
This party was new and formed before the last election. They had been polling well, but this has changed since the snap election. The party was formed by defectors from Independence, and their main plank is supporting clean government.

Bright Future
The party has been polling rather poorly for the past while now, rendering their decision questionable politically; however the party's main plank is clean government, and in that context their decision does make sense.

Left-Greens
In 2009 they were the jr partner in a Social Democrat lead coalition. The party is polling very well right now, and potentially can lead the next government. If so, I think this will be the first time a party so far to the left has lead a government in a nordic country.

Pirates
This is your standard and default pirate party, that support an open internet, and copyright reform. The party is generally left but due to being a supposed "single issue" party, also has members on the right.

Progressives
Formerly one of the two major parties, the party is Liberal, but has most of its support from Rural areas. It was their leader and then PM, Sigmundur Davíð Gunnlaugsson, who was involved in with the Panama Papers scandal. Needless to say, he was removed as leader.

Social Democrats
This party won the 2009 election, and their leader, Jóhanna Sigurðardóttir, became the first lesbian Prime Minister. Their inability to turn around the financial crisis lead to them suffering heavily in the polls in both 2013 and 2016. Policywise, they are a pretty standard social democratic party.

Peoples Party
This populist party is generally left, but as with all modern populist movements in 2017, has anti-immigration policies. Their main policy is to help the poor and disabled. The party ran in 2016, but did not meet the threshold.

Centre Party
The home of the return of our friend Sigmundur Davíð Gunnlaugsson. The TLDR version of this party, is a copy of the Progressives, and as such, it can be expected to split the vote with them. The party is brand new (as in it was formed 3 weeks ago) so its policies are not nailed down yet.


Polls are very good for the Left-Greens, and they are increasing in the polls. If trends continue (and they probably will) the Left-Greens will be leading the government in all likelihood. Likely coalition partners include the Pirates and Social Democrats. The latter, in particular, lead a coalition with the Left-Greens from 2009-2012

Both Bright Future and Reform have been polling below the 5% threshold, and thus, are unlikely to return to Parliament at this term.
Posted by TheNewTeddy at 1:10 PM