You should see a list of ridings, and the results. On the left you'll see the raw ballots cast, and on the right, the share of vote. For now, focus on all the numbers above the thick black line, and, only focus on cells without a grey background.

The data above the line simply shows the 2018 results.

Now look at the numbers between the two black lines.

Here I've placed the 3 most recent polls. Leger, all post-writ; Narrative, polled during the writ drop; and Angus Reid, polled months ago. There could be an argument to ignore such an old poll, but I wanted at least 3 polls for this example.

I've summed the polls together. So, the PC Party for example, gets its 40% from Leger, added to its 44% from Narrative, added to its 39% from Angus Reid. This results in 123%. I then take one third of that, or, 41%, and this becomes our poll average for the PC Party.

The next step is to use the following formula: (Poll Average) / (Previous election result) = (Factor)

Finally, I want to figure out the number of "points" in each riding each party is estimated to obtain. This is the greyed out area below the second black line.

Note that these are not votes estimated. These are simply the numbers that result when you multiply the last-election result, in each riding, by the factor for the party in question.

The last step then is to find the share of the vote in each riding. Doing so tells us the PC Party, by the math alone, is estimated to take 15.56% of the vote in Restigouche West.

The sheet shows the math for every riding. It produces a map like this: 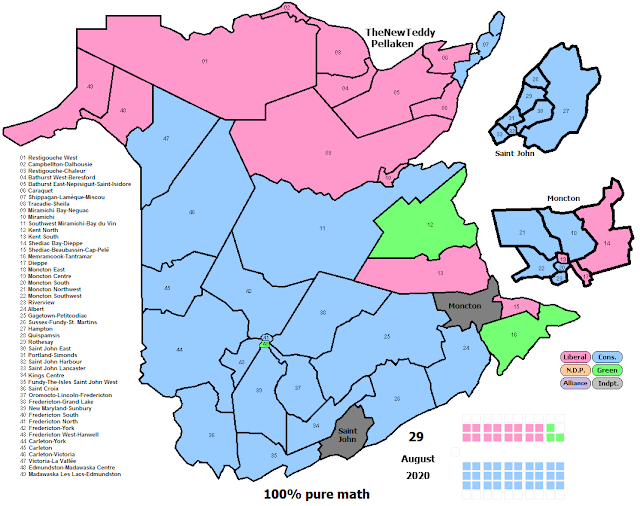 You'll notice however, that this map is not the map I've been using as my prediction map. Why?

Simply, cause there's more to forecasting an election than applying a single formula. A good election forecaster does not start with guesswork, they start with math. A good election forecaster does not end with math, they do more. Take for example the Peoples Party in the last federal election. Since they'd not run previously, all forecasters using only math would have had this party taking 0 votes. Therefore, every single forecaster across Canada had to do more than use one pure simple formula to estimate results. Additionally, each forecaster also broke things down regionally, using regional polls to project each region instead of a single nationwide topline poll. In effect, they were running roughly 10 different forecasts at the same time.

Go back above the two black lines and look at the area on the right shaded in grey. For this area I've quite simply copied the raw vote in select ridings. Which ridings? Ridings that I decided were "french". I then summed these results, and found the vote share. This told me the PC Party took 21.78% of the vote in these ridings. Finally, I subtracted the vote numbers from the "french" ridings, to get a number for the "english" ridings. This told me the PC Party got 37.87% in the "english" ridings. Great! Now I have something I can roughly compare to the most recent Leger poll's demographics. Doing this helped me see that while the Liberals do appear down in Anglophone ridings, that they've not moved much in Francophone ridings.

This is, of course, just a rough estimate; but it can help give you an idea of what's going on in subregions of a province.

This is why my current prediction is as follows: 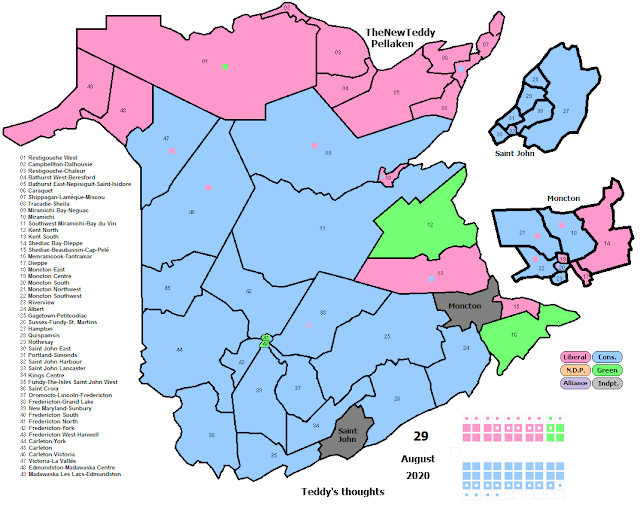 You'll notice that this differs from the math. Let me explain where and why.

Firstly, I've given the Liberals a chance to win nearly every seat they currently hold. It is always possible that voters will sour on the tories for calling this election. While I'm not seeing that happening, I am keeping an open mind to its possibility. As such, each riding currently held by a Liberal has a red dot in it. As do two additional ridings in the Moncton area.

Why these two, and not others where the Liberals were closer?

Simple; the PANB vote has collapsed. Polls show not only PANB doing poorly, but Kris Austin, their leader, also doing poorly. As such I've judged it more likely that PANB voters will go PC this election, and thus, boost the PC vote. Since these Moncton area ridings do not have PANB vote totals as high as outside the Moncton area, it seems likely that if the Liberals are to gain, it will be ridings like this where it will happen.

So, what of ridings the math says the Liberals will win, but I've coloured in blue?

That is also simple, as we saw with the demographic numbers, the Liberals are down in Anglophone areas. This means any PC gains will be stronger there. Additionally, 2018 PANB voters could help push a 2020 PC candidate over the top.

Great, but what of PC ridings I've predicted will go Liberal?

There's only one and its a Francophone riding. Given the PC Party seems up in Francophone ridings, people may consider this an odd choice, but remember that the PC MLA elected in that riding in 2018 left the party. When this happens, even if the MLA does not run again (he is, but in a different riding), strange things can happen. Sometimes the party will actually increase their vote, but just as often, their vote will decrease. Given the circumstances, it is my guess that the PC vote will drop here, and as a result, the Liberals will be able to take the riding; but, that they may only hold on to it for a single term.

Wonderful. How about the prediction in specific ridings? What of Kent South (#13) for example?

This one could be a weird one. I actually lived here for a year and voted here in a federal election. Kent County as a whole tends to be somewhat united. What impacts one part can and will impact the other. Additionally a quick look at the poll by poll results of the federal riding can show what is on my mind. One easy way to get there is using this map. As you can see, the Greens, while only winning a single poll, did very well in other polls in Kent South. Put another way, I suspect the vote could be split here, and that if this happens, it could allow the PC Party to sneak round the right to victory.

Note as well on that federal map how well the Greens did, federally, in the other riding they hold provincially. With that in mind, pan on over to Fredericton to see why I've made one of my more controversial calls.

Fredericton North, the provincial riding, was "won" by the Greens, in the federal election. It is my expectation that the provincial party can pull this off again at the provincial level. Beyond that, the battle between the Liberal MLA and his PC opponent provides an excellent opportunity for the non-Green parties to split the vote and allow the Greens to sneak around the left to victory. It is important to keep in mind that in the Maritimes especially, all the parties are more 'moderate' versions of the same party we find elsewhere in Canada. It is thus not crazy to image someone who usually votes PC who will lend their vote to the Green candidate in 2020. The Candidate the Greens have also does not seem to be 'a weirdo' or 'crazy', and while I wouldn't rank them as a 'star', they seem to be active, and are likely acceptable enough to win.

If you look closely at the riding, however, you'll notice some blue in there. 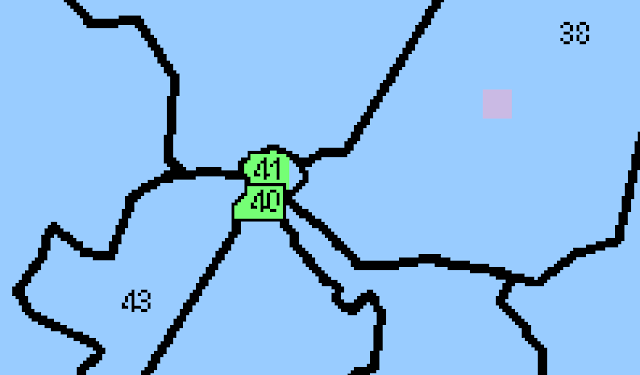 These is one of the "dots" I mentioned earlier. It means that while I currently think the Greens will take the seat, that there is a very high chance that the Tories will take it instead.

The same is thus true for riding #38. While I think the Tories will take it, PANB can hold it. It is not only their 'best' riding, but, is that of their leader, Kris Austin. Given his personal low polling, however, he may be in for a tough battle.

Riding #10, Miramichi, could go PC but looks like it will go Liberal. It's the seat of a PANB MLA who won in a "shocker" last election due to her personal electability. It is the riding the Liberal Leader, Kevin Vickers, is running in. The actual winner will depend heavily on local factors, and as such, is difficult to predict.

Lastly, Riding #01, Restigouche West, is probably one everyone has their eyes on. I had previously seen this as a clear pickup for the Greens. That changed upon seeing the breakdowns within the Leger poll. While the Greens could still take the seat, the Leger poll suggests the party is too weak in Francophone ridings to do so.

As such, my current prediction is as follows: