US Projection, FPTP math, and other things


Outside of personal news, I've also done up a projection update for the USA. Trump is bleeding votes in all the polls and things are looking very good for Clinton as not as many people are turning towards Johnson as expected. Johnson likely won't make the debate (he needs a steady 15% to do so, and is closer to 12% at the top and 5% at the bottom) but there is time for this to change.

As such my current projection is as follows: 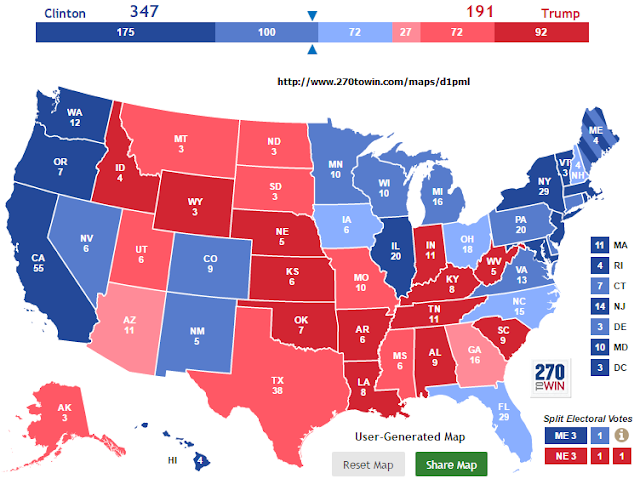 I highly recommend the website BTW. http://www.270towin.com/maps/d1pml You can make your own projection and see how the math stacks up.

As for how bad it can get for Trump; this is my current projection on that front: 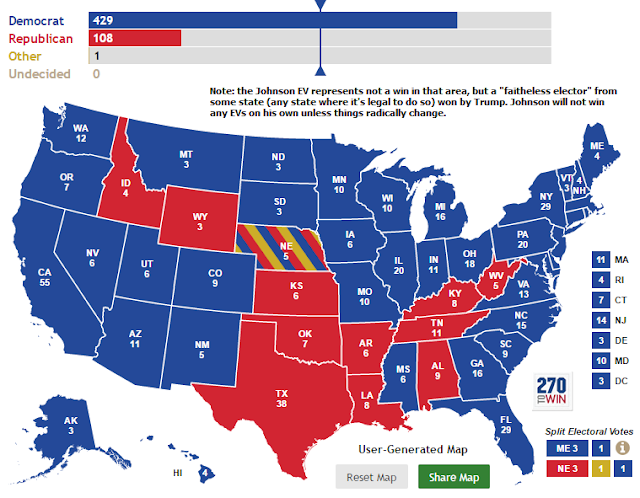 Johnson getting even 1 EV would be an embarrassment of sorts. I don't think Johnson can win any EVs on his own. He's not close enough in any of the districts of Maine or Nebraska, nor is he close enough in any individual state. The most likely places for a win would be New Mexico, on his base support, and Utah, on splitting the vote by other candidates. In Utah in particular, it's possible the winner will take under 1/3rd of the vote, should this happen the chance for a Johnson victory increases.

The only other candidate in Utah who could make an impact - and it's unclear if he has managed ballot access or not - is Farley M Anderson, who took 2% of the vote in the 2010 governors election. The Constitutional party, running Darrell L. Castle, may also play a role, but without a quality campaign and clear ballot access (no sign of either) it's unlikely that these candidates can take more than 10% of the vote, and even under great circumstances, they'd struggle to run even with Johnson in the state. No other state has such a potential vote split, and so I will continue to keep an eye on Utah.

I have a simple formula for making very rough projections for FPTP results. In this, you simply square the popular vote. Here are some examples:

Not that bad for a very, very simple formula.


Here is the Alberta election from 2015 using the same math

As you can see it's not perfect, however for such an extremely simple formula, I do feel it can be useful in some ways.
Posted by Unknown at 5:40 AM