As such, Turnout is going to decide what happens. How, and more importantly, why?

The Liberals. In 2018, it was time for the Liberal government to take a break. As such, many regular Liberal voters didn't show up to vote. You can see this in turnout of ridings with traditionally high Liberal vote shares.

Doug Ford has not done a terrible job; and Andrea Horwath has failed to convince anyone new to give her the Premier's chair. Del Duca has done a bad job at getting people to vote Liberal, but, it's unclear just how bad. This is why things depend on Turnout. There are roughly 250,000 voters across ontario debating if they are going to bother voting tomorrow, and the vast majority would vote Liberal. This is, very roughly, 2K voters per riding, with more in Liberal ridings. If none of them bother voting, the Liberals take perhaps a dozen seats, gaining next to nothing over the last election. If all of them bother voting, the Liberals hold the PC Party to a minority.

So, what will turnout be?

This is why I have more Liberals winning than they do.

As such, this is what my prognosis looks like: 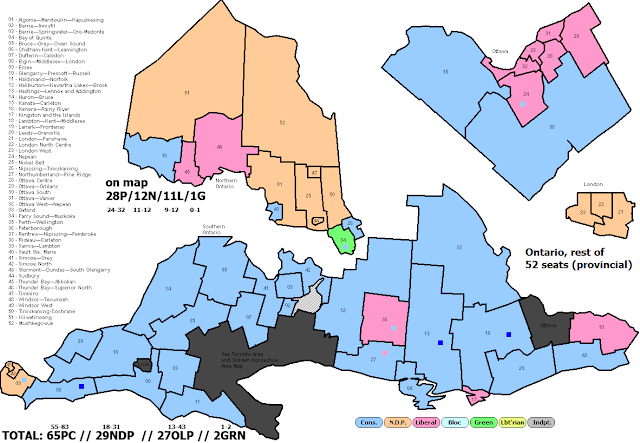 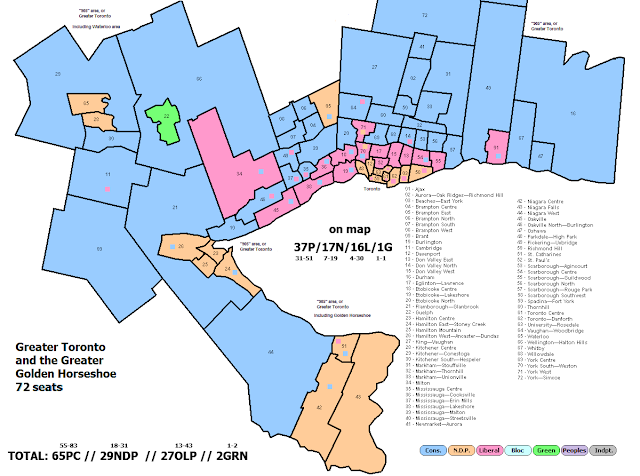 You'll notice more dots. You may notice particular ridings, like Peterborough, or Lisa MacLeod's own riding, where I have perhaps controversial calls. This is due to the impact of the recent storm, which, I think may have a heavy impact on the PC vote. I also have all 3 of the larger "far right" candidates listed as possibilities. This is because I'm not certain that their voters are honest with pollsters, and so I have suspicions.

Regardless, I'm expecting a PC Majority, but, one that's smaller than many others are thinking for the reasons I've outlined. If turnout is low, expect a larger win, if it is high, a minority could be on the cards.

Posted by TheNewTeddy at 3:29 PM