A slight bump in readership due to a recommendation. As such, a bonus post.


In short, there is a change going on within US Politics. Parties and politics itself is transitioning from the "old right" and "old left" to the "new right" and "new left". This is similar to the change that we saw 100 years ago when the Liberal/Tory split became a Socialist/Conservative split.

In this election, Bernie Sanders is from the "old left" while Donald Trump is from the "new right". This is why the two candidates have some overlap on issues like TPP.

The change is also a demographic one. More and more poorer voters are switching from old left to new right. Go here http://projects.fivethirtyeight.com/2016-swing-the-election/ and change the non-college educated white fore from 62%R to 72%R to see the threat that Donald Trump poses.

These are the sort of changes in base demographics that stick with a party. This is also a reflection of changes that have been occurring for quite some time now.

As such, in 2030 this is what the "default starting map" will look like: 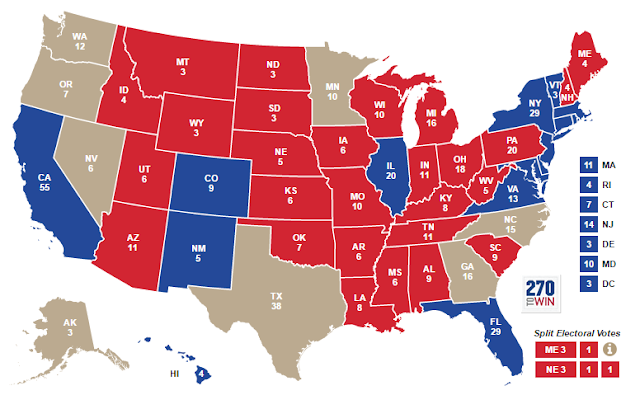 As you can see, many current "blue states" are now "red states" or are neutral; while important "red states" like Texas, are now battlegrounds which will lean blue. Take note that by the time 2030 rolls around, the number of votes each state casts will have changed.

Wisconsin and North Carolina are the two canaries in the coal mine that will signal this major change, and we have already seen Obama win the latter in 2008.


All in all it promises to be an interesting time as politics transitions from the old to the new, not just in the US, but worldwide.
Posted by Unknown at 5:11 AM