I've done a massive update to the ElectoMatic. It's still "broken" but it works far better.

Given the difficulty of uploading a huge number of images, I've broken down the more detailed updates into sub-pages. The updates will be broken down as follows:

The Small 63
These are the 63 ridings in "smaller provinces and territories". In short, the Atlantic, as well as the Central Prairies (Manitoba and Saskatchewan) and the Northern Territories. These 63 seats are from provinces and territories that are limited by the Grandfather clause, and as such, these 63 seats, while they may have moved around within their respective provinces, have remained since the mid 70's. They are 14 seats for Manitoba, 14 for Saskatchewan, 11 for Nova Scotia, 10 for New Brunswick, 7 for Newfoundland, 4 for PEI, 1 for Nunavut, 1 for Yukon, and 1 for the Northwest Territories.

The West
Given that Manitoba and Saskatchewan are already accounted for, this "West" consists only of two provinces, Alberta with 34 seats, and BC with 42 seats. These 76 seats easily out number the small 63 and are an important battleground this election with the Tories trying to hold on against not only resurgent NDP numbers, but increasing Liberal numbers as well.

Quebec
We finally get into some of the largest provinces with Quebec and it's 78 seats. This update will focus on this province and will will document the successes and failures of the NDP and Liberals to capture the province.

Ontario
It is in Ontario that we truly see huge masses of votes. The greater GTA has 71 seats all to itself, a number able to compete with either Quebec or our definition of The West. This leaves a whopping 50 seats for the rest of Ontario. If the Tories are to win the election, they will need to win here.


For now, the front-page, and as such, national summary. Expect 4 more updates over the next few hours detailing the projection update. 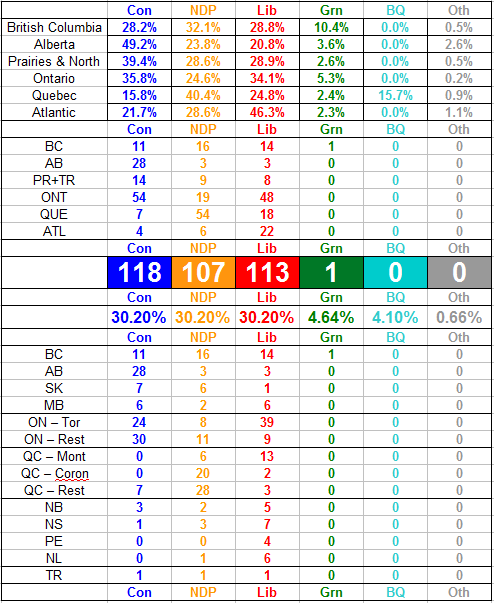