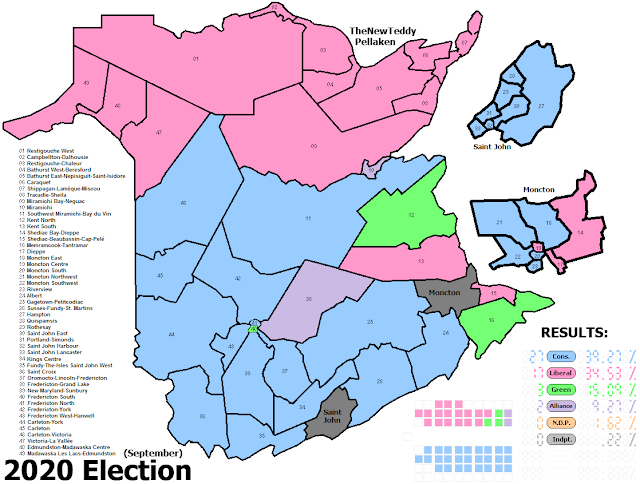 The election went pretty much as many expected, so there's not much analysis.

There has been commentary on the PC's victory given they failed to win 40% of the vote. One of my tweets implies an answer. That tweet also includes a link to a google doc with the results, and demographic breakdowns. I also tweeted a map with language breakdowns. I also tweeted a number of other things I found interesting; if I'm quiet on the blog it is always a good idea to poke in on my twitter account to see if I'm active there.

Basically, I do a lot of work that only ever makes it to my twitter, and this is a reminder to always check in with me there.

Posted by TheNewTeddy at 7:50 PM No comments:

Suga Yoshihide has been elected by the governing LDP as its new leader, and thus, the new Prime Minister of Japan. He won 377 votes, compared to a 89 for Kishida and 68 for Ishiba. He will take office in the coming days, as, like Canada or the UK, he needs to meet with the Monarch (or the Monarch's Rep, in Canada's case) before he officially becomes PM.

In Israel, there are developments. Litzman, the UTJ leader, has quit cabinet. The UTJ, however, say that Litzman's move was no sign that it would withdraw from the coalition government.

Today is, of course, the New Brunswick election. I'll be discussing it on Twitter and in my Discord server as it happens.

Posted by TheNewTeddy at 9:03 AM No comments: 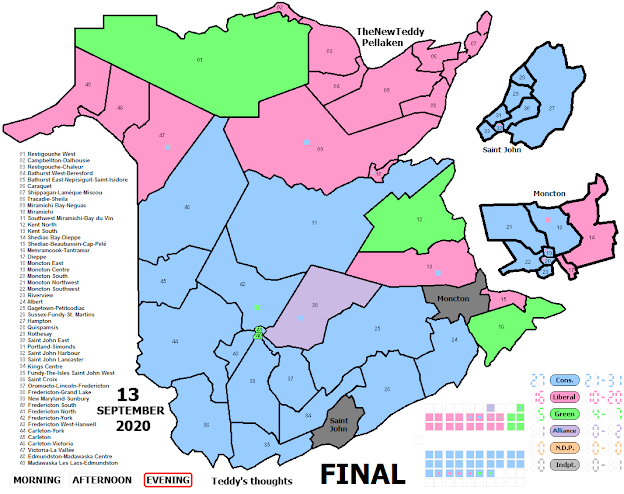 Posted by TheNewTeddy at 9:54 PM No comments:

Lets start with the map! 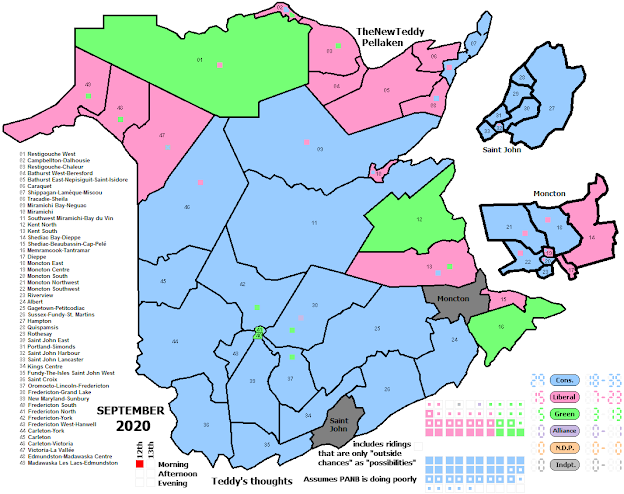 As you can see on the map, I've made a few changes.

The map now includes ridings that are "outside chances". This means the amount of ridings each party can win has been expanded. This is clearest by the Green gains around Fredericton.

One assumption I've been forced to make is that PANB is not doing as well as some polls think they are. Why is this?

Many pollsters will "prompt". That means they'll say "Who are you voting for, PC, Lib, Grn, NDP, PANB, or other". When you "prompt" you tend to get higher numbers of unpopular parties. Contrast this with someone asking "PC, Lib, Grn, or other". In the latter, you are likely to see much lower NDP and PANB numbers in your poll. The only difficulty is trying to guess if the pollsters 'should have prompted' as the small party is going to do well, or, 'should not have prompted' as the party is going to do poorly.

It is my assumption that the pollsters should not be prompting for PANB. However. I could be wrong.

One reason PANB may be doing well in prompted polls but not in unprompted polls is that people are still not fully willing to give Higgs a majority, but are at a loss as to how to vote as a result. If this is true, then PANB will indeed take 10%+ of the vote, as, once people take a physical look at their ballot, they'll know exactly what to do.

If, however, people are not really "considering" PANB in their minds as a viable option, then seeing it no the ballot paper will not matter. Historically, this happened a lot to the NDP in places like NB or PEI, where prompted polls will always show a higher number than the election.

Regardless, I'll be posting updates on twitter, and those wanting the latest info from me, can find it there.

Posted by TheNewTeddy at 9:14 AM No comments:

Eye on Israel (and other updates)

First, the updates. The new CDP in Japan will only officially be merged on the 15th, not yesterday, as I reported. I'm chalking this up to translation, as, there is little english info on the merger. Also, I'll be making a post about New Brunswick tomorrow morning.

Today, however, I quickly wanted to mention some things I'm seeing in Israel. As many of you may already know, Israel has established relations with the UAE, and now, Bahrain. What's been catching my eye, however, are the polls.

There have been 3 polls this month, averaging them, we get the following:

What's interesting is that a right-wing coalition of Likud, Yamina, Shas, and UTJ would easily have 66 seats and a majority.

More interesting is why that is.

Bibi has, at least to me, seemed to have been moving to the right over the years. It turns out, I am not the only one who perceives this. Naftali Bennett, leader of Yamina, has noticed this too. He's taken his party, which currently has 5 seats, to 20 seats in the polls, in large part, by moving it closer to the centre. He is still right-wing, of course, but he is now able to fit in in a more pragmatic place then Bibi.

I've mentioned before that Gantz's hope is to "take over" the gigantic core of small c-conservative votes that Bibi currently has a lock on. Gantz would love it if the Likud-Hosen coalition were to continue after Bibi steps down, and that Gantz would simply, effectively, become leader of Likud. Bennett essentially wants the same. This contrasts with Lapid's plan to take the place as Prime Minister by being progressive and growing the anti-conservative vote.

Right now, Bennett is doing an excellent job. Covid may be a huge reason why. Israel is  country of 9.2M people, according to estimates based on official census figures. Israel has 148,000 covid cases as of today. This compares with 135,000 for Canada, a nation of ~35M, and 284,000 in Italy, a nation of ~60M. According to this website, which, from what I can tell, constantly has data that closely mirrors official government numbers, Israel has 16K cases per 1M people, making it the 16th most covid-infected per-capita on the planet, behind the USA (20K), and Brazil (20K), but ahead of France (5.5K), the UK (5.3K), and Canada (3.6K). The Deaths-per-Capita figures are more generous, indicating that perhaps Israel is simply testing many people, with at rate of 119 per million, contrasted with 117.8 for the world as an average, behind 242 for Canada, 595 for the USA, 612 for the UK, and 1,237 for San Marino, but ahead of Germany at 112, India at 56, and New Zealand at 5.

The "TLDR" is in the Bennett vs Gantz battle to be the next PM, Bennett is winning, but that Bibi still has an edge on both, for now.

Posted by TheNewTeddy at 6:37 PM No comments:

The opposition in Japan has completed their merger process, which I mentioned in a previous post.

The name CDP (Constitutional Democratic Party) has won 94-54, and the CDP's leader, Edano Yukio, by a margin of 107-42, has been elected as leader of the party.

The new party will change the makeup of both the lower and upper houses of the Diet. I want to compare how things were at the start of the week, to where things are now, after the results. Note that this graphic was prepared in advance of the results of the vote, so the new party is labeled as "NEW", while those DPP members not joining are labeled as "TAM" after Tamaki Yuichiro, current DPP leader, who will not be joining the new party, and instead, will be starting a new party with other disaffected members of the DPP. Lastly note that I am not certain that the current opposition coalition will stay together, but, given the numbers I've outlined in the last paragraph, I believe they will be, as, they will need TAM to keep 50+ seats in the upper house. 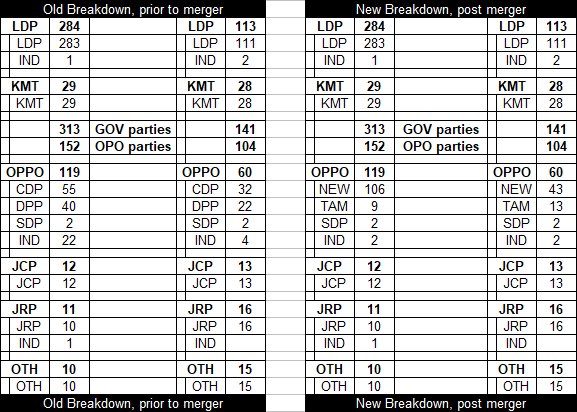 The major change is the consolidation of members within the newly merged party. This also will help boost the party at election time. Japanese election polling has a strange tradition of having massive amount of "don't know" respondents, only for a good 2/3rds of them to break for the largest opposition party. By pooling all of the 'oppositionness' into one party, it will help to concentrate that vote into a single force, and prevent a split result.

Note that the size of each party also determines what they can and can not do in each chamber. In the house, for example, parties with 100 or more members can propose amendments to the constitution, while those with 50 or more can propose budgets, or votes of non-confidence (VONC). Those with 40 or more can censure MPs, while parties require 20 members to propose legislation. Only parties with 10 or more members get guaranteed spots in debate. In the upper house, there are only three "levels", 50 or more grants the ability to propose amendments to the constitution, while 25 or more allows for VONC proposals, and 10 or more are needed to propose legislation.

Posted by TheNewTeddy at 10:00 AM No comments:

US election, Trump probably will be re-elected

Not much commentary, as, I try to avoid US politics, but, this is my current prediction: 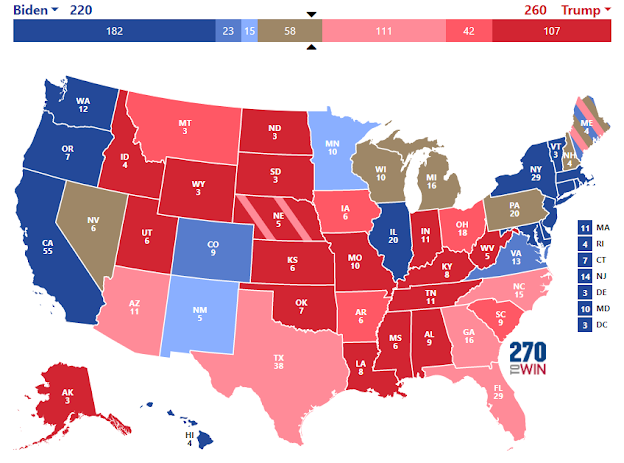 Posted by TheNewTeddy at 10:12 AM No comments: